It’s raining again. Actually, it rained a lot this summer. Not daylong downpours that ruin all the vacation plans, but flash thunderstorms late at night that last no longer than an hour. The kind of storm that makes you grateful to stay inside — to snuggle down in your bed and think about how safe you are. They remind me that this city environment is not immune to the motion of nature. I look out my window and watch the water soak into my garden.

The community garden on 11th Street in Hoboken has enriched my life. My last local address had a private backyard I could reach by climbing out my kitchen window and down the fire escape. But my days of balancing a tray of perennials in one hand while blindly stepping down a metal ladder are over. When I moved into my new place, there was no backyard. I could look out my small hall window at trees, squirrels, birds and other neighbors’ landscaped backyards, but couldn’t get to them. Soon, I was missing my little plot, and one night prayed against all hope, “God, please give me a garden.”

Within a week, a note appeared in my mailbox saying that a new community garden was being organized in the five-block meridian in the middle of 11th Street. After months of looking longingly out the back hall window, I scurried through my kitchen to gaze out the larger front window in a new direction — at the trees, bushes, stone border, random blossoms and healthy weeds within easy reach just outside my front door. I signed up immediately.

One thing I discovered is that if I let the plants tell me where they want to be, and let them spread where they choose, competing amongst themselves for ground space, the garden design works better than anything I can plot out on paper and force into place. When I garden my life that same way, attentive to the living patterns but with no final expectations — it goes better as well. Just follow the flow provided by God and nature, experiment with images I like, and weed out what seems to distract from the overall plan that is emerging.

This new garden isn’t actually private — it is viewed from all sides. Neighbors and strangers can see everything from all angles, seem to feel free to pick flowers and regularly dash through the beds to catch the 126 Bus into NYC. I had to learn a lot of quick lessons about how to design and plant with the general public in mind — as well as turn the weedy lot into an extension of my personal space. Instead of asking people to stop stepping on my petunias, it became obvious that I had to accommodate the foot traffic with a well-placed stone pathway. And that we all would enjoy plants with attractive sturdy foliage, and small flowers that don’t last if you pick them — so I didn’t get as frustrated that strangers were trampling my work. After a while, I realized that the garden had changed my shape and approach to the task as much as I had changed it. 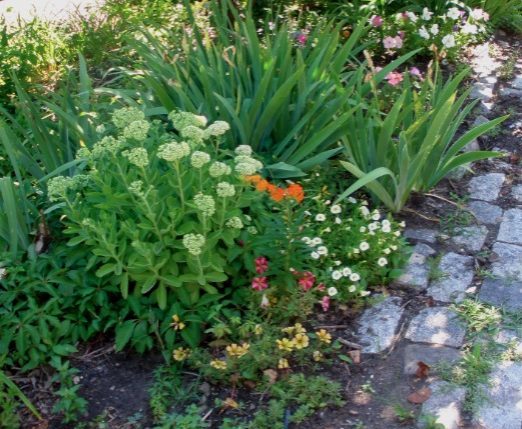 When I look out my front window, I can tell if I need to get out there and water. My first clue is that the flowering plants stop flowering. That can seem like an emergency, and I find myself soaking the flower beds first, so they will be pretty again. Soon I realized that the whole garden needed water, not just the showy parts. How often do we do that with people — only pay attention to the ones that can beautify our world? But a garden has many kinds of beauty, and they all need attention and caring. So I’ve learned to watch the plants more closely, and try to attend to the needs of everything living there. Hopefully this trait carries over to the way I treat people as well.

Some anonymous donor planted a small rose bush in my plot, and I watched it grow. After a few years, it was big enough to be a thorny problem and needed to be trimmed. One of my gardening neighbors offered to teach me how to trim the bush back in the fall, and I took notes while watching his rapid ninja-like precision with the shears. The next year, I tried to follow his directions but found it difficult to cut back so many smaller branches. It took several days’ sessions of my slow meditative considerations of which branch to clip and where. It was hard to believe I wasn’t harming the plant in what felt like an attack.

But the bush came back looking healthier. So a year later, I was more confident and speedy with my trimming. The next spring, the bush just exploded out of the ground and grew to a huge, robust size. I was no longer afraid that this method was violent or harmful. It made me reflect on times of loss when I felt my life’s work was being torn away and my identity trimmed back to just the core. It doesn’t have to seem mysterious or feel like an attack or a loss. The rest of God’s creation works just fine with cycles of growth, dying and letting go. This is just the way things grow.

The garden and I have both grown. My life has been enriched by receiving this gift after asking for the impossible, by looking for answers in new directions, and letting God and the plants tend to me and my development as I learn more life lessons from my tiny plot of God’s green earth. Through it all, I’ve never forgotten that this gift of a garden was the direct answer to a prayer.