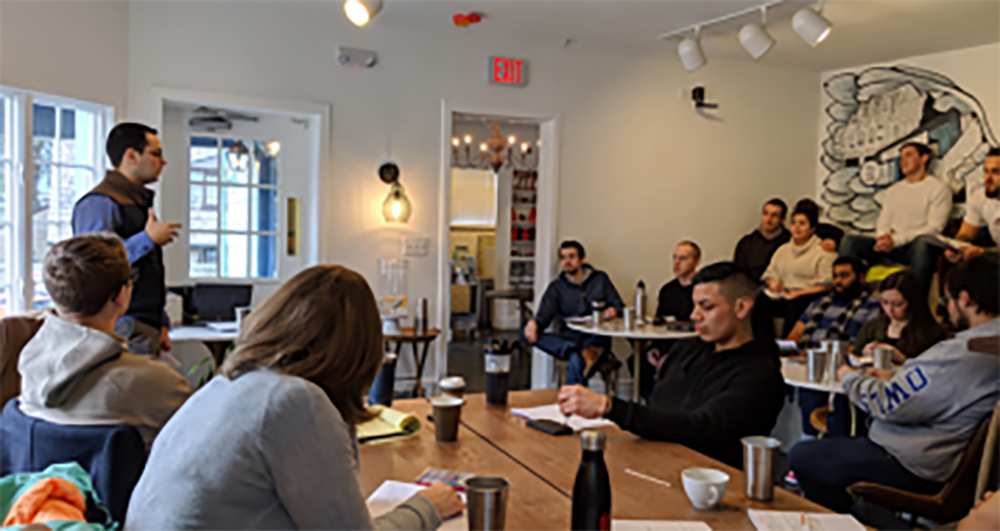 The end of January is almost here, and you may think it’s too late for those New Year’s resolutions. But regardless of what the calendar says, it’s never too late to work on your goals.

This past weekend, about 20 people gathered for a one-day conference in Montclair to outline a vision plan for 2019. Hosted by Devin, who has attended Hoboken Grace for the past few years, the retreat also touched on how to follow through on your goals and how to keep them at the forefront of your life.

The Writing Team recently chatted with Devin about the conference, as well as some tips for goal setting.

The Power of Intentionality

Devin started the day with a short introduction and asked attendees a question he’s been asking himself: “What does it look like to grow towards the call God has for my life?”

“A slow and quiet revelation of who I am and what I have been called to has emerged out of the pursuit of this question,” he says.

When starting to make a goal, Devin suggests starting with a broad idea. You take the dream, bring it down to a vision and then get very specific with your goals.

Simply setting a goal — and establishing a plan to see it through — requires intentionality. The retreat gave many the time to step away from their phones and other distractions and think deeper about their goals. In doing so, some found that in order to get to their future goals, they had to take care of some other goals first. Which brings us to…

Our Life Is Connected

Devin explains that through coaching he’s received, he realized he was being crushed by pursuing goals in one area of his life and ignored what he was neglecting. If you think of the different sections of your life as part of a wheel that consists of goals in different departments –career, financial, spiritual, physical, intellectual, family and friends — each needs to be attended to with care for the circle to roll. If one outweighs the others, you will be crushed by a wheel (life) that is uneven, he says.

In taking the time to sit and think of the connectedness of our goals and our lives, those areas that needed attention became clearer to some. Devin says that in goal setting, we may need to step away from future goals to take care of other goals first. Diving deeper into God’s word and spending more time in prayer to build a solid foundation is an example of that. “Laying the foundation is so important, as we can see in the story in Matthew 7,” Devin says. “We can’t control the circumstance, but we can control where we build.”

Finding people you can share your goals with and who can check up on you are important to the process of goal setting. For many at the retreat, finding those people became one of their goals.

“If I don’t have someone to do something with, I’ll never get anything done,” he adds.

Having that community is important for many reasons. “If you’re in a rut, you need to hear from other people, that’s ok,” Devin says.

Those people can help remind  you of who you are and how God continues to pursue you.

Keep Going. Goal setting takes persistence. It’s a messy business, but if we wait to begin we’ll never get anything done. And as we’ve been walking through Hoboken Grace’s Vision series, we’ve seen that God has a vision for us, too — one that is more focused on who we are becoming.

And if you fail? Devin suggests focusing on what has been working, not what you don’t accomplish.

“Look at how God has been faithful,” he says.

And even though the calendar is inching toward February, you still have plenty of time.