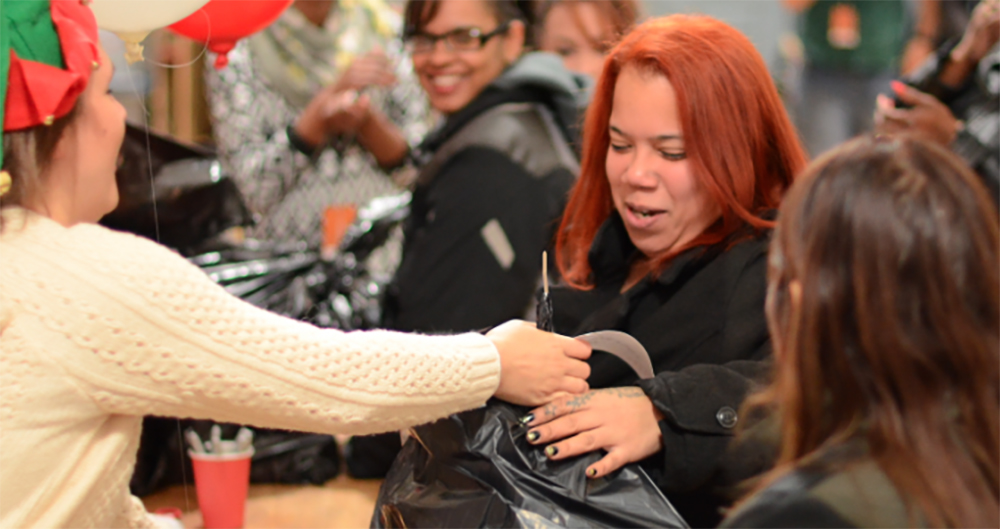 Last week, we shared the story of one person who started the Hoboken Christmas Exchange as a way to connect members of the community. This week, we’re featuring the story of one of the gift exchange’s incredible donors. This blog post was originally published  in November 2017.

It was a birthday with special significance, and not just because Raakhee’s daughter was turning 1. Before reaching that 12-month milestone, Satya had already survived cancer. So when her parents began thinking about her first birthday, they told friends and family they didn’t want gifts — only money or gift cards, or something else they could donate.

“We were really in that mind-space of just looking at our lives and thinking how lucky we were and how blessed we were to have a healthy baby,” Raakhee said. “We wanted to do more for others and use our lives to the benefit and for the good of others.”

While standing at a bus stop on Washington Street one day, Raakhee saw a flier for the Hoboken Christmas Exchange. It was a few weeks after Satya’s birthday, and Raakhee still had presents from the party. She called a number for the gift exchange, asking if more gifts were needed.

“There were so many kids and families who still needed presents,” she said.

She sprang into action, calling and emailing friends and family. In the days and weeks that followed, her third bedroom transformed into a staging area, filled with bags of gifts.

It was a huge team effort, she says, with countless people pitching in.

A few years later, it’s also turned into something of a tradition. Gifts her family receives throughout the year now go into a closet, and at the end of the year, around Satya’s birthday, they go to the Hoboken Christmas Exchange, the Tomorrows Children’s Fund in Hackensack and foster children throughout New Jersey.

“I collect gifts all year round. Anything. People think I’m nuts – from a toy to a pair of socks, to a coat, to a sweater, I have it all,” Raakhee said.

When she reads the lists of items needed for the Hoboken Christmas Exchange, the requests are often for simple things – coats, scarves, toys. In most cases, they’re items she already has.

The gifts — to the Christmas Exchange and other organizations — have gone to countless people across New Jersey. Raakhee estimates she’s donated thousands of items over the past three years. Last year alone, she provided dozens of gifts through the Hoboken Christmas Exchange, said Sonja, one of the coordinators.

“You guys make it so easy,” Raakhee said of the event. “If people knew how easy it was, everyone would want to help.” It’s something that brings the entire community together, she added.

More than three years after her cancer diagnosis, Satya will turn 4 this month, marking another season of gift-giving. Raakhee’s closet is already full, brimming with items for the Hoboken Christmas Exchange. There are clothes, toys, hats. There are bags of socks and gloves – gifts from a cousin who knew she’d find someone to give them to.

And as Raakhee’s closet opens and her home becomes a staging area once again, Satya will make cards and drawings to accompany the gifts. Teetering around piles of presents, she might also help her mom pick out a coat for a recipient or a pair of gloves. It’s a tradition they follow through together — one borne out of gratitude.

Interested in adopting a family or individual this year through the Hoboken Christmas Exchange? Visit hobokengrace.com/Christmas.