When Thomas was 14 months old, his mother, Aminatta, lost hope. Born a triplet, Thomas’ two sisters had died soon after birth, and his father had passed away while Aminatta was still pregnant. Everyone in Aminatta’s life, from her friends to her family and neighbors, told her that something was wrong with Thomas, and she needed to do something. And because Aminatta lived in a slum in Freetown, Sierra Leone, and had never heard of Down syndrome, let alone what causes the condition or the kind of lives that these children can live, she took her son to a witch doctor who told her that Thomas was possessed. He then took her money in exchange for chanting over the baby and leaving him under a tree to die.

But Thomas didn’t die that day. Instead he managed to crawl back to the house where his mother was staying. And Aminatta, hysterical with worry, reclaimed him and soon after found real help and hope with a group called Enable the Children (ETC).

Since 2007, ETC’s incredibly dedicated staff has been working with children with disabilities and their families across Freetown. They are devoted to providing physical and occupational therapy to children with special needs and working with the families to encourage, educate and support them, while raising awareness and acceptance in the surrounding communities. They are the only organization anywhere in the country of over 7 million people working to care specifically for children with physical and developmental disabilities, and to date they have touched the lives of over 800 children and their families who had nowhere else to turn.

It’s an uphill battle in a country where children with disabilities are often abandoned or neglected by parents who are told that their baby is cursed or simply don’t have any extra resources to provide for a child who needs additional help and potentially expensive medical care. With most families surviving on less than $2 a day, investing scarce resources in a child who might never be able to tangibly contribute to the family seems like a lost cause — hopeless math.

Even from the outside looking in, the math is hard to work out. Jim, a longtime member at Hoboken Grace, has traveled to Sierra Leone two years in a row with a mission team to work with World Hope, ETC’s parent organization. A self-confessed number nerd working in finance, Jim said that when he reviewed all the time, money and energy that Enable the Children was dedicating to these kids, he wasn’t convinced it was the most effective use of resources.

“I can be a pretty cynical cost-and-benefit analysis guy,” said Jim. “They are spending all this money and time on just a few hundred kids. And in all reality, many of these children might not live long enough to grow up.”

His doubts aside, Jim said he couldn’t help but be moved when he met the families and kids that were getting support from ETC. Kids with cerebral palsy who had spent their lives indoors on the floor were sitting upright, feeding themselves and getting to go outside with other kids. But the finance guy in the back of Jim’s mind kept on asking, is this really the best return on investment?

After a day visiting with families, Jim said he spoke privately with ETC’s director, Anna, and asked her how she keeps going when the program is so expensive, and it’s so hard to get grants for this kind of work, and many of the kids might not live to graduate from the program.

“I’ll never forget what she said to me,” recalled Jim. “She just said, ‘Look, Jesus said we are called to serve even the least of these.’ ”

“That was just like a punch between the eyes,” said Jim. “Even now, I look back and think what an idiot I was being. I was thinking about this in terms of finance, metrics, returns — human-based analysis, and that is not how God works at all.” 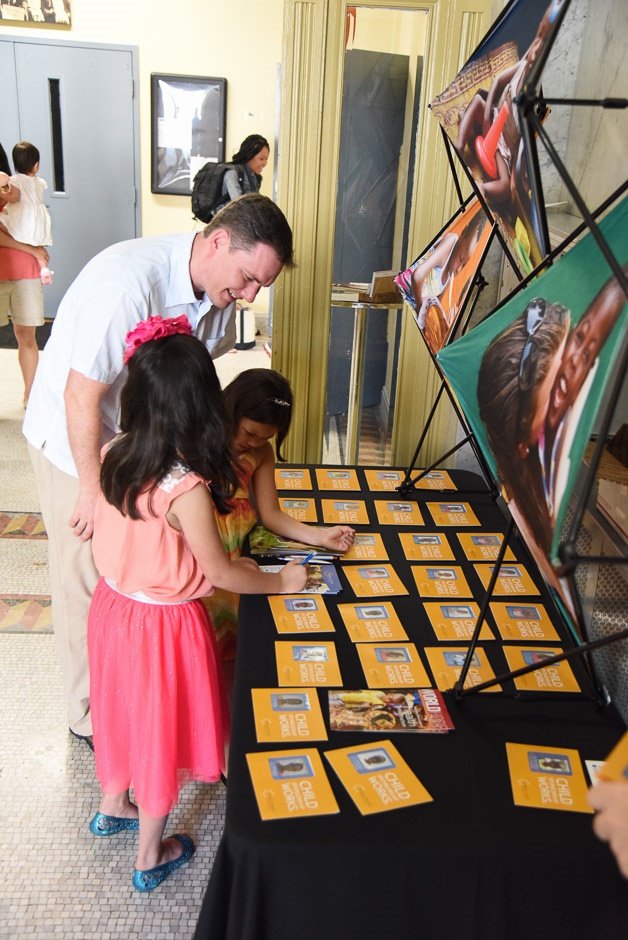 God’s math is a calculus of infinite mercy and undeserved grace. Debts that can’t be paid erased, every hair on your head counted and eternity accomplished. God’s math makes two fishes and five loaves of bread a buffet for five thousand and moves the first to last place and the last to first.

“We’re all pretty hopeless investments for God,” said Jim. “But thankfully, He doesn’t look at us that way. We’re His children. We’re priceless. All of us, without exception.”

That’s why Hoboken Grace is not only partnering with Enable the Children to support their staff, but is also encouraging anyone with a heart for kids with special needs to become a child sponsor. Since the child sponsorship program launched in December, 40 people have signed up online. Just last Sunday at Hoboken Grace, 60 more sponsors answered the call.

“At the end of the day, no house has been built, no well has been dug. It can feel like there is no tangible result that you can put in a spreadsheet,” said Jim.

But how do you measure hope? Or reduce love to a bar graph? Aminatta’s son, Thomas, is 5 years old now. And for her, every birthday is a number that’s worth everything. Love isn’t a logical investment, but it’s the only investment of any real value.

Interested in learning more about child sponsorship through World Hope’s Enable the Children program? Visit their website or email Jim with any questions.