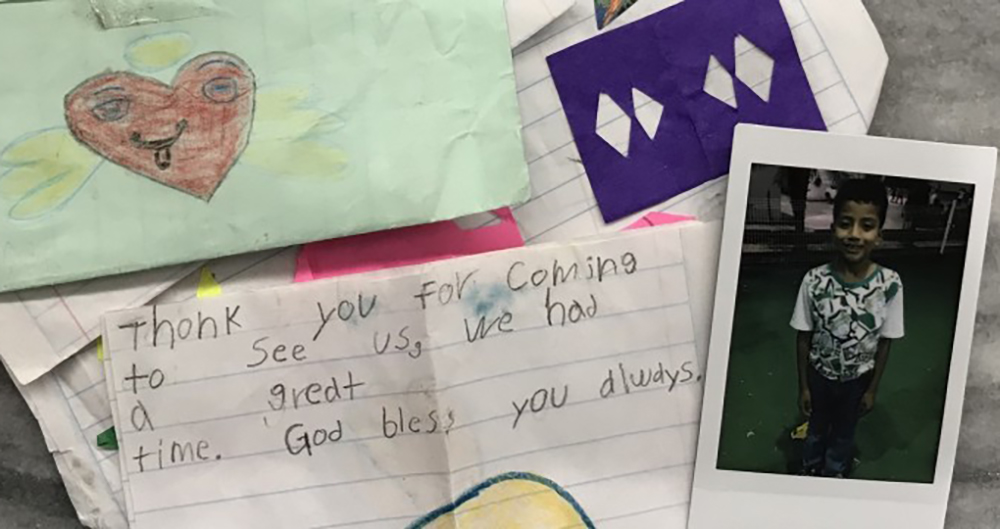 I got a glimpse at life as a rock star on my mission trip to Mexico.

As our vans and trucks arrived within the walls of our “home” for the week, the Casa Hogar Alegre orphanage in Tuxtla Gutiérrez, the kids ran out and surrounded our vehicles with the enthusiasm of super fans. All of the clamor wasn’t for me, though — it was for those on the team returning, some after years and years of building relationships with these children. I wandered around the reunion scene, taking in all the kids and adults racing and jumping into hugs, and the children screaming and yelling and anxiously scanning those coming out of the vans for familiar faces.

When I left a week later, I too would be leaving having formed special bonds with some extra-special kids. I’d also take with me a change in heart and faith that before that week I had heard was often “profound” as it related to mission trips, but also seemed somewhat cliché. 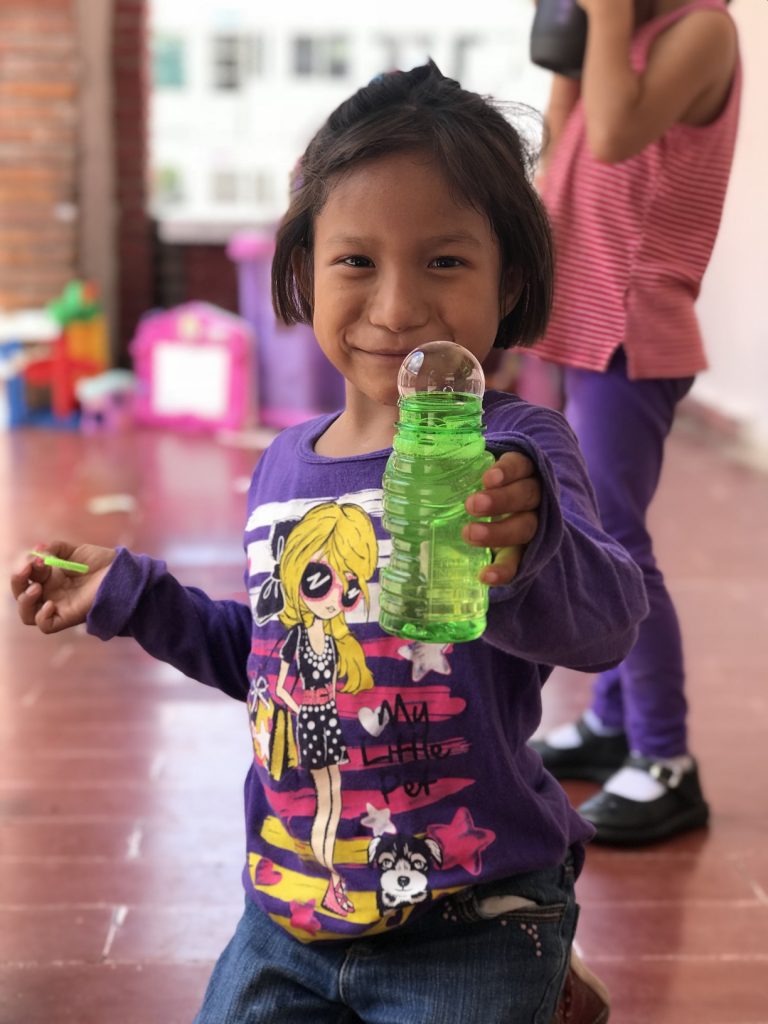 So what was I doing here? Why did I leave my husband and two boys for a week of sleeping on a cot in a room of mostly complete strangers? What was I expecting to happen as I spent time with these kids in a completely unfamiliar environment and language?

A few months before, I’d heard a message from Pastor Chris about how to define your calling or mission. He spoke of an author who defined it as our inmost passion colliding with what we feel is the world’s deep hunger. As I processed the message from my seat, I concluded that for me, my mission is connecting with people, tangibly — specifically, those disadvantaged in some way, and even more specifically, children.

I was immediately drawn to this mission trip with that message in mind, and it didn’t hurt that the Tuxtla trip was light on the manual labor front and heavy on kid interaction. So I made a plan for myself and my journey with God on this trip. I wanted to deepen my experience of loving others completely and freely. I also wanted to take this time to face some issues I have with forgiveness — that is, forgiving myself. While I know in my heart that I’m forgiven and that Christ loves me no matter what, it’s been a constant and years-long struggle. I felt like a phony. The worst and most unforgivable kind.

Besides the nail polishes I’d packed for a pop-up nail salon, I prepped by marking devotionals and Bible passages. My story was “rehearsed” and ready to share, as we were encouraged to engage with our teammates. When I shared mine with my team members, 99 percent of whom I’d met for the first time that week, I dove deeper than I expected, maybe because of the new environment and freedom I was feeling given the amount of unfilled time I can’t remember the last time I had. I exposed my true self, and was met throughout the rest of the week by some particularly compassionate and wise Christians.

The cathartic release of doing so, combined with my reading and time to simply think, was invisibly working wonders for my core. This, combined with the incredible closeness I felt with God as I spent so much quality time with these beautiful kids, was ramping up to a reconciliation I would never have predicted.

As I hung out with the kids at Casa Hogar, listening to Coldplay on the speaker I brought, painting nails with super excited girls of all ages, playing tag with the most rambunctious boys, and making paper airplanes for toddlers, I had in the back of my mind a specific picture. It was of Jesus surrounded by kids, an illustration from a page in the Bible I had growing up. I finally knew how He must have felt in that picture, simply enjoying the unconditional love they offered me so freely, while sharing my own with them.

At the same time, I began to feel anger. As I got to know these kids, I allowed myself to resent and question who would be sick enough to abuse them, as I heard so many were before arriving at the home. I saw scars on the side of some of the boys’ freshly shaved heads, especially after Dana and Eric on my team served these kids by giving them haircuts. It was a sight particularly painful for me, after years of being unable to have another baby. And here were children who’d been abandoned, some of them literally thrown out like trash when they were tiny.

I grew close with one of the boys I’d started out playing tag with, Miguel. He was the same age and build as my oldest son, skinny with a slim face and mischievous eyes. We couldn’t communicate that well given I spoke no Spanish, but we became playground buddies. He gave me a note in the middle of the week, written in Spanish, thanking me for my visit and ending with wishing God’s blessings for me. When we walked with the kids the next day on their highly anticipated field trip to the local science museum, we were told to choose two kids to hold hands with on the roadside walk. Miguel and I found each other instantly, and I hugged him close just as I do my son after not seeing him for awhile.

By week’s end, I had written a note for Miguel, thanking him for his friendship, reminding him that I love him, God loves him, and his family of the 90-plus brothers and sisters there love him. I also told him to be a good boy, again, just as I would my own son, and told him that if God allowed me I would visit him again. 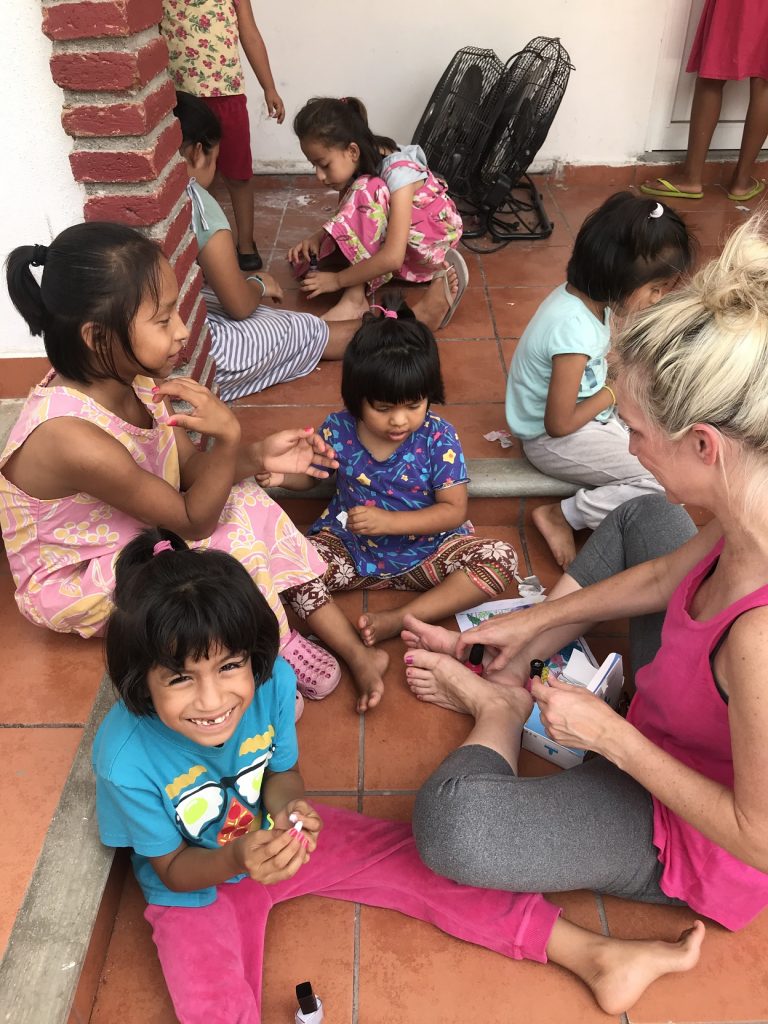 That last night as the long goodbyes with the kids commenced, selfies and Snapchat pics intermingled with soft crying and hugging goodbye, I picked Miguel up off his feet and hugged him close. I cried harder than I thought I would, and when I felt his tears on my T-shirt I wept as silently as I could and struggled to set him down and let him go. I kept telling him, “It’s okay, it’s okay. Don’t cry.” I’m sure he understood.

To say that in the moments after I gave in and put him down that it all came together in my head would be a gross understatement. My being furious with the evils in the world and with the loss these kids had of loving, doting parents, was met with the hard yet true realization that those who had put them there were forgiven. Further, God loves those parents, just as he does me, and I am unable to judge them as I myself am guilty of making poor choices — choices that tear at me today, that leave me shaking my head at myself, much less others I somehow feel have made some “worst of the worst” list along with me.

God sees us as all the same, which can be mind-boggling, especially if we consider ourselves to be on the darker side of some imaginary sin scale. We are reminded of this truth in Romans 3:23. He forgave all of us, loves and pursues all of us, regardless of our record of wrongs. I am not here on this mission trip, I told myself, or here on this earth, period, to judge or feel hatred. I cannot judge the circumstances or people that put those 90-plus kids there, nor can I judge anyone else for that matter. My true mission, in Him, is to offer love and support to His mission, in this case to support the loving family that runs the orphanage. Time spent being angry at others or at myself is time wasted. Energy spent being disgusted with others or myself is energy wasted. Blame or shame won’t get me anywhere, and hinders my ability to fully accept and apply His grace, as well as to accept my place or others’ in His bigger picture.

Sometimes I reference an airline attendant’s instructions at takeoff of “secure your mask before you help others” when I share with someone what it is I need to work through. It’s so true. Now that I’m able to accept His grace, I’m in a better position to share it with others. Hearing those instructions on the plane as we flew out of Tuxtla had a whole new meaning for me.

Now, God willing, I’ll be one of the returning team members next year. When Miguel sees me and I scoop him up I’ll be the one star struck, wanting to take pics with him and interview him about how much he’s grown in the past year. He’s the real rock star, as are all the beautiful faces from my week there. He is and they are the ones who taught my once silent and scared heart to sing in the light of His forgiveness and grace, just by letting me love them. Who knew? Not me, but He did.

Kara serves on the Events Team at Hoboken Grace and loves serving those in her community just as much as serving the children she met at Casa Hogar. Want to learn more about Hoboken Grace’s mission trips? Click here.