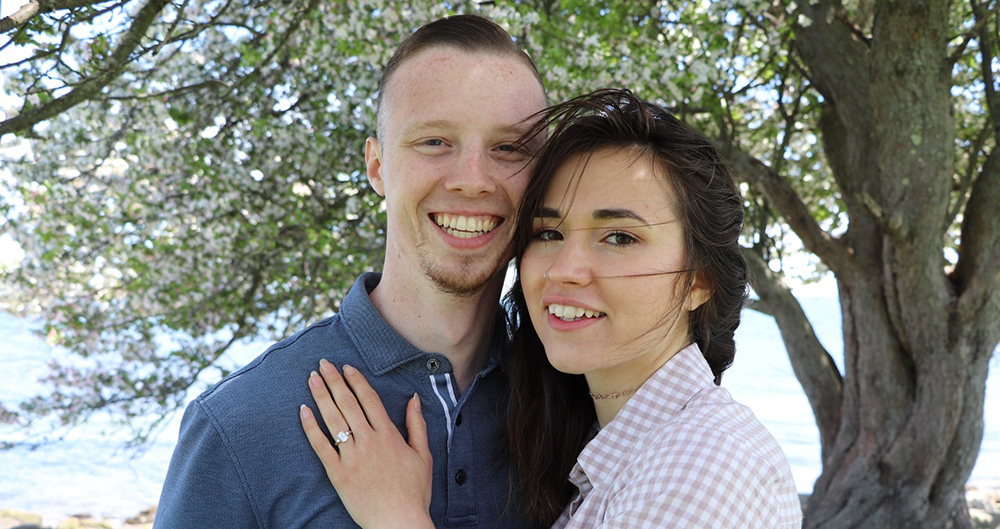 When Zach and Hannah took the big step in their relationship together by deciding to get married, they knew they needed to take another step and attend the Merge Class in order to build their marriage on a Godly foundation. That step led them to take the next step to join a Dinner Group, which led to the next step of serving on a team.

When taking these important steps, they faced the fear of the unknown many of us feel and they confronted their doubts about what role they could play or where God was leading. But they decided to be faithful and follow Him deeper, even if they didn’t know where it would take them. They found their faithfulness rewarded with growth, friendships, and a community of believers who supported and encouraged them on their journey.

The Story Team recently interviewed them to hear more about where God has taken them and why they feel like taking steps of faith that lead to growth is so important.

Story Team: What brought you to Hoboken?

Zach: I went to school at Stevens Institute of Technology and my job is a bit more important from a financial perspective so it made sense to stay in the area where I would be able to readily find work. I’m a DevOps Engineer, so I’m in the Tech Industry.

Story Team: How did you meet each other and how long have you been married?

Zach: I got a job interning at IBM in Southbury, CT. After some prayer and the closing of other doors, they offered me a position for the summer that I couldn’t turn down. Hannah grew up in Southbury, CT and was preparing to leave for school in Budapest. At the time, I had been in a lull with my relationship with God and wasn’t particularly interested in looking for a church in an area where I knew no one. I did church online for the entire summer and didn’t make any friends in the area. Luckily, IBM kept me on working for them throughout the school year and into the next summer (2017).

That year in school, I got connected to Stevens Christian Fellowship and starting attending Hoboken Grace regularly. So, when the time came for me to return to Connecticut, I knew I needed to stay plugged into a community of Christ-followers. I spent a lot of time researching churches in the area and settled on a church that I thought would be a great fit.

The night before I was to attend the church I had in mind, God told me that wasn’t the church He had in mind for me. I reluctantly researched churches in the area one last time and stumbled on one that I hadn’t found before. As I walked into the lobby that Sunday, I saw a group of young adults talking. Amongst the group I noticed Hannah (whom I didn’t know at this point), and I audibly heard someone behind me say “You are going to marry her.” I turned around and no one was there. We hit it off and the rest is sort of history. I tested God in that, praying regularly that He would show me specific signs that those words were from Him.

Leading up to that weekend we met, Hannah had been struggling with Lyme Disease and was just finishing her treatment and finally feeling healthy. She had told her mom that she was going to find a different church because she didn’t think she would ever meet anyone at her church.

We got married on December 28th, 2019 so it has been about 15 months that we have been married now.

Story Team: What brought you to Hoboken Grace?

Zach: Friends at college got me to start going to Hoboken Grace in 2016 and I fell in love with it. When Hannah first came, she felt the same way.

Story Team: What steps did you take initially to get more involved at Hoboken Grace and why did take them?

Zach: I think for me, it was really just understanding how important community is. It has been remarkably easy in my past to simply stop spending time with God at all, let alone in the capacity that He deserves, if I wasn’t also spending time in the company of other believers. We did two rounds of premarital counseling, one before marriage at our old church and the Merge class at Hoboken Grace.

We’ve both just been hearing God’s call to continue pouring into the community and I’ve felt like I owed it to God because I’ve been lurking at Hoboken Grace without ever getting involved. It has always been important to Hannah and I both that we are attending church and growing our individual (and mutual) relationships with God, so it was a no-brainer to start getting more involved after we were married.

Hannah: I took the first step of attending church weekly when I moved to Hoboken and then started attending premarital classes from Pastor Chris with Zach in an effort to deepen our relationship and meet other couples!

Story Team: It seems that attending regularly and the Merge class led to you taking another step to join a Dinner Group, what made you decide to join and how has that experience been meaningful to you?

Zach: I would have to say that it was making friends. Going into the Merge class, neither of us knew anyone at the church (though I had interacted with Chris and Anthony through Stevens Christian Fellowship in the past). Hannah didn’t know anyone at all. She had just moved to a new state to be with me in Harrison. That sort of move is huge when you don’t know the area and you don’t know the people. But at the Merge class, we met another couple and hit it off and became great friends rather quickly and once we heard that they were in a Couple’s Dinner Group we knew we needed to get involved in one too. Dinner Groups were something I had thought about for years. I knew I should join one, but always managed to come up with some excuse as to why it wasn’t a good time.

Hannah: Dinner Group has been meaningful to me because it has encouraged me in my faith and has given me friends to be open and honest with!

Story Team: After being in a Dinner Group and seeing some of your fellow group members serving, you both decided to take the next step into serving. Tell us about the teams you joined, the roles you’re serving in, and why you each decided to serve.

Zach: When we joined the Dinner Group, we started getting more nudges and seeing how others were serving and the impact that was having on not only their lives, but the lives of those around them as well. And of course, I know that God calls us to serve regardless, so that always lingered in the back of my head as well. I knew I needed to get more involved and I have never really served at church before so I didn’t (and still don’t really) know what skills I have that could best be used, but I know God does and He’ll reveal them to me in His time. So, I just told the group that I wanted to get involved and the next day, I got an email from Roman asking if I would be interested in joining the Next Steps Team. I’ll be involved mostly with helping set up baptisms and coordinating the larger events throughout the year.

Hannah: I have volunteered to start serving in Grace Kid’s. I haven’t begun yet but I am excited to help serve my church community in that way by making services accessible for parents.

Story Team: How have all these steps deepened your growth and drawn you closer to God?

Zach: It’s difficult not to grow closer to God when you’re spending more and more time with Him, and I think that’s the trick. When you start to think more about Him than yourself, or you catch yourself realizing “Man, I need to give Him more” or “I need to think about Him more” it can be eye-opening and encouraging because you are starting to notice. I’ve also started consistently meeting with God in the mornings to start my day and my routine in His presence. That has helped me get to know Him in ways I didn’t think possible.

Hannah: Having accountability from a small group and being a part of something great at a loving home church has helped deepen my walk with God.

Story Team: What would you say to someone wrestling with taking a next step and why would you encourage them to do so?

Hannah: I would encourage them to go for it! More community and meeting people who will encourage you in your walk with God is always a good thing.

Zach: Just do it. A lot of the trepidations involved in wrestling with taking next steps, in my experience, boil down to a “fear of man.” Not necessarily of others, but of ourselves. It can be easy to feel like God can’t use me or I’m just one person, but the impact that one person can have even on just one other person can be life-changing.