For Janet and other members of Hoboken Grace’s Collection Tables Team, it took a cold winter day to put their support of The Hoboken Shelter in perspective.

A storm had postponed their monthly food drive, but not long after, Janet and others on the team resumed their post at a table outside ACME. It seemed the cold weather brought out warmer hearts, as they watched the collection grow into one of their biggest hauls ever.

“It was cold, but we were even more motivated to keep at it seeing how much people were donating that day,” Janet said.

When they arrived at the shelter to drop off the donations, Janet was taken back to where the refrigerated items are kept. There was only one thing left: a single bottle of Vitamin Water.

The truck scheduled to deliver supplies hadn’t made it  because of the snowstorm. The relieved look on the chef’s face and the tears creeping into the corners of everyone’s eyes brought the realization of just how big a blessing their huge haul was.

“What we collected that day was going to be immediately used that night,” Janet said.

The monthly food collection is just one of the ways Hoboken Grace supports The Hoboken Shelter, which hosts 1,000 showers weekly, serves 500 meals daily and houses 50 people nightly on the corner of 3rd and Bloomfield. In addition to the food drive at ACME on the fourth Saturday of each month, a separate team from Hoboken Grace helps prepare meals on the first Friday of every month. You don’t have to be a chef to help. You just need to donate some of your time and be a part of the team that provides what is sometimes the only meal a person may have that day.

An event announcement on Hoboken Grace’s Facebook page was enough to capture Julia’s attention. She’s enjoyed cooking at the shelter so much that she decided to put in some additional time on her own.

“There is such a caring nature to everyone that is there,” she said. “I went to help prepare meals and found out that there are so many other ways to help. I figured you could donate clothing, but it isn’t just adult clothing. There are some women with children who can also benefit from clothing donations. You forget that kids are impacted as well.”

Collecting donations is simple – team members sign up to spend one hour, once a month at a table in front of ACME. They hand out a list of the shelter’s most needed items to people entering the store. Shoppers then drop off those items on their way out.

The first time Janet served at the collection table, she was taken aback by the generosity of the people in Hoboken. She initially thought most people were going to just walk by, but instead she found people stopping and saying, “How can we help?”

Janet says she often meets people who want to give back but are limited in time or don’t know how to help. Handing them a card with a list of most-needed items makes it much easier.

“There were even some people that walked into the supermarket and didn’t walk out with anything for themselves,” Janet said. “They just had bags filled with items they wanted to donate. They either heard about the collection drive or didn’t see what they were originally looking for, but they wanted to provide for someone else. It was very heartwarming.”

Although she has had to put her volunteer time at the table on hold since the birth of her son, Janet is looking forward to getting back to it once he is a little older. She says it’s a real treat to see volunteers bring their kids along to help out. It guarantees an instant smile when a little hand reaches up to give you a flyer. Janet says she loves that this type of serving provides such a tangible and immediate positive result with such an easy, one-hour commitment. 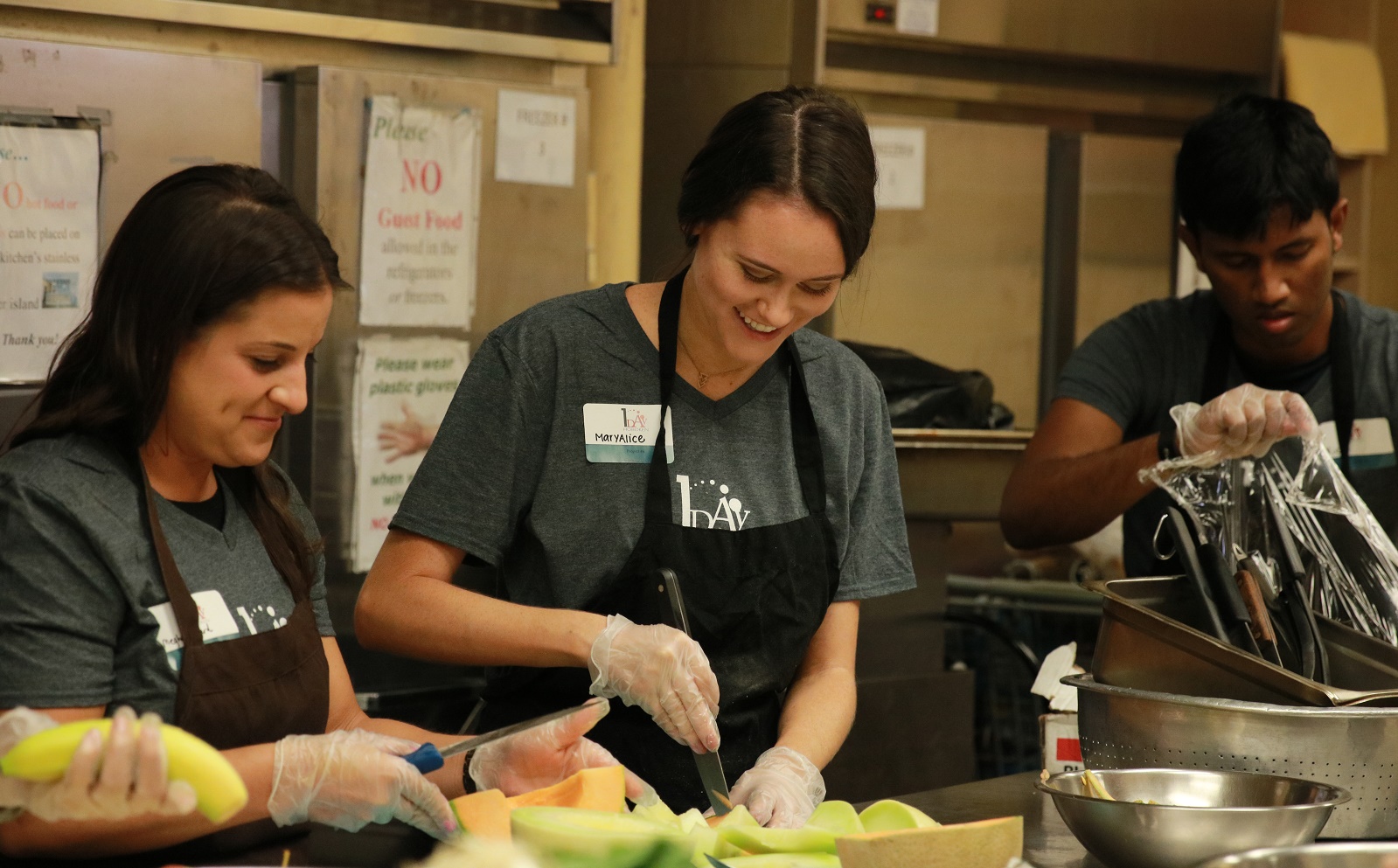 Keith, the shelter and programs manager, says the support means a lot. “Guests appreciate the volunteers because it shows that people outside of the staff care,” he said. “They really enjoy seeing familiar faces; it helps with morale. Lots of guests feel invisible or looked down upon. Here they get friendly service with a smile. People don’t realize how difficult it is for anyone to do anything, especially go to work or appointments, when they haven’t eaten.”

The shelter is grateful for any help. Everything donated helps save money that can be allocated to additional resources. And the shelter functions as more than just a place for food and shelter. It serve as a community outreach location connecting people with resources. Not only can someone come to take a shower, they can also get help with vocational counseling, computer literacy programs, financial literacy workshops, housing counseling and so much more.

Volunteers with experience in any areas are welcome and there is no need to call in advance. Just show up anytime Monday through Friday between 11 a.m. to 3 p.m. or any day of the week from 6 p.m. to 8 p.m. Feel free to contact Keith at Keith.Jackson@hobokenshelter.org if you have any questions.

For more information on how you can join the Collection Tables Team or serve at the shelter with Hoboken Grace, email Anthony at anthony@hobokengrace.com.