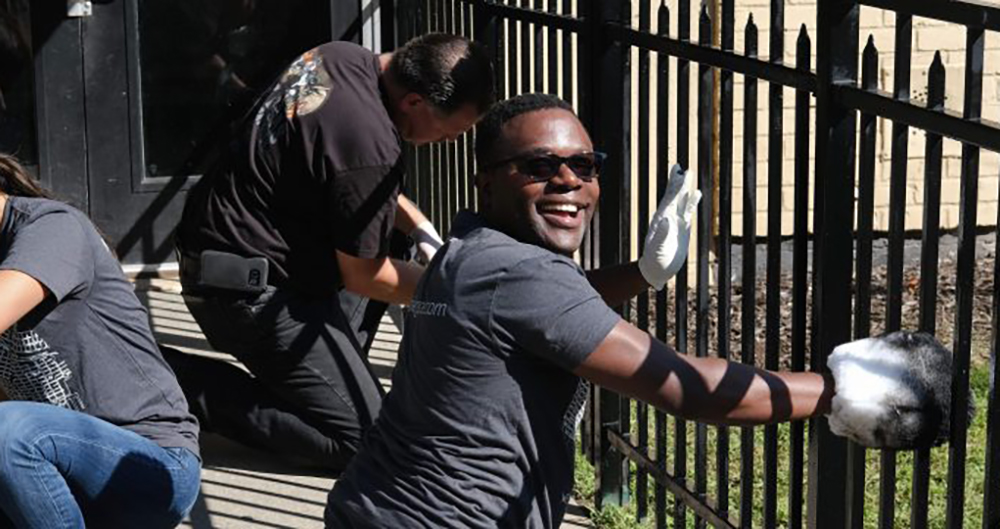 Hoboken City Hall on Washington Street has garden plots all the way around the building, facing all four sidewalks. As the largest gardening project taken on by this year’s 1Day volunteers, it involved over 700 various plants and a complex design plan.

The section in the northwest corner has a sign that reads “Joan R. Abel Memorial Rain Garden – Architect – Preservationist – Environmentalist.” It goes on to explain Ms. Abel’s solution to Hoboken’s notorious flooding.

But the most enthusiastic participants of the day couldn’t even read the sign. Several 3-year-olds wearing oversized garden gloves hopped between the pots and onto the freshly tilled soil, adding their tiny shoeprints to the garden pattern. A girl with a loose blond ponytail dug randomly at the dirt while her father tried to organize her efforts. Then she unearthed a worm and squealed, calling the other 3-year-olds over to witness her discovery.

Theresa, one of the moms who was keeping a close eye on the little gardeners, said this was the second time her son Tommy had attended 1Day, although he didn’t really understand the event last year. This time he was excited, and understood more fully that it is our chance to love our community, she said.

“We’ve lived in Hoboken three years and we love it,” Theresa said. “God loves us really well and it’s our chance to love the community. This is a corner of the city that we are going to pass every day, and the kids will know that we helped make it beautiful.” 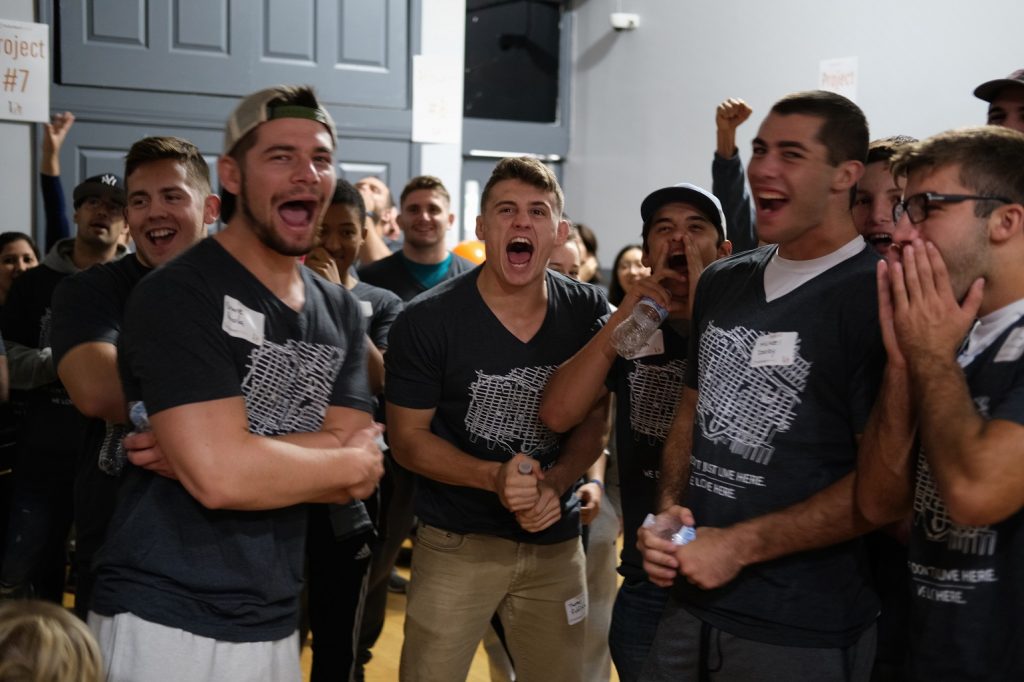 That, at its core, is what 1Day is all about. The goal of Hoboken Grace’s annual event is to leave a lasting mark on the community – and impact as many people as possible. The 520 volunteers who signed up did just that, completing 35 projects in virtually every corner of the city. Thanks to them, hundreds of children walked into brighter classrooms and hallways, dozens of bags of trash were removed from city beaches and parks, and more than 1,000 new plants are helping make Hoboken a little greener. Volunteers also served local businesses, nonprofit organizations and more.

At the Hoboken Shelter, a group ranging in age from 16 to nearly 60 prepared a meal. As music played in the kitchen, Jackie manned the industrial range, pouring cans of arroz con guandules (rice with pigeon peas) in one pot, and arroz con frijoles (rice with black beans) in the other. Peppers, purple onions, garlic and spices floated in the top of one mixture, and chorizo was added to the other — just in case some people didn’t want to eat meat. “And we add con mucho amore!” Jackie said — cooking with a lot of love.

At the metal prep table, a tasty-looking variety of restaurant rolls were being cut into single-serving-size pieces and put in huge bread baskets. At another point, the table held huge plastic pitchers full of water, and people leaned in with big spoons to swirl in iced tea mix. The close quarters encouraged everyone to get to know one another. 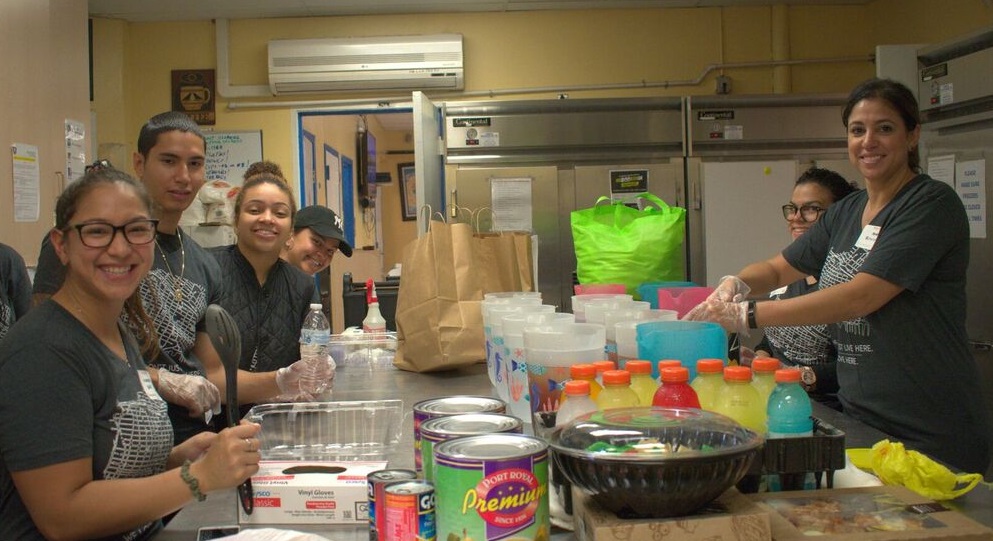 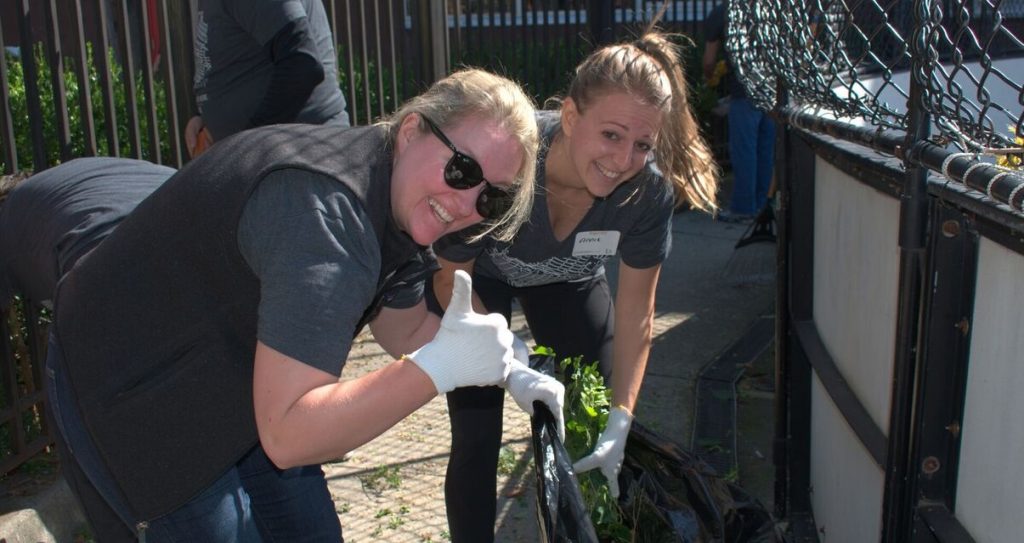 Not everyone who worked on a 1Day project had signed up for the big event.

When a group of 20 people arrived at Maxwell Pier, they met a man who had come by that Saturday to clean up the beach by himself. He asked what they were doing there, and they explained the 1Day event taking place. They welcomed him and invited him to join them, offering a bag and gloves, but he already had his own.

When someone asked why he was there, he told the group he had proposed to his fiancée at the same spot last spring, on Earth Day.

“We are both concerned about environmental issues, and the beach and surrounding area was a clean and natural setting then,” he said. “We walk by here often because it’s a special place for us. We’ve seen it get more and more cluttered with trash coming in with the tide, and people leaving behind items from socializing on the beach.”

After passing by again during a run the night before, he’d decided there was nothing he wanted to do more with his Saturday than clean up the beach. So after a morning trip to Home Depot to buy work gloves, a bucket and a plastic grabber, he headed over to the beach and was greeted by 20 volunteers who seemed to have arrived just in time to help him with his chosen task.

“It was such a surprise to see so many other people out here with the same mission,” he said. “Now it looks better than it ever could if I’d been working alone. Thank you.”