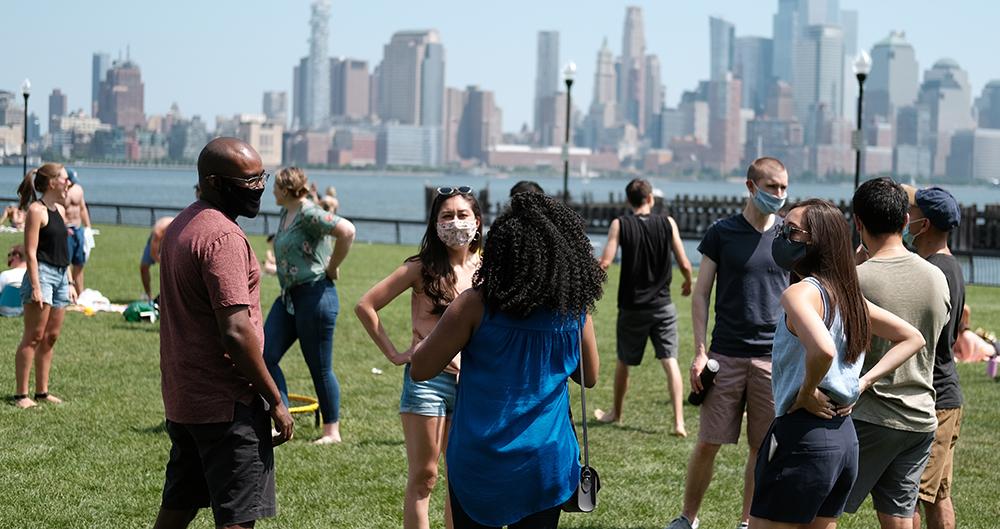 Since March, social distancing has forced us to live life over Zoom, FaceTime, email and snail mail (for those of us who are REALLY bored). It hasn’t stopped us from participating in connection events, but the events had to be online. Online connection events are fun and enjoyable, but nothing beats seeing each other face-to-face. On June 28th our community traded their sweatpants for some real pants as we met at Pier A Park for an afternoon of friendship, smiles, sun, and spike-ball.

Our time at the Pier was a laid back, casual setting which was just what everybody needed to reenter the world of in-person socializing. “It didn’t matter what we did” Nick, Hoboken Grace Community Director told me. “That’s why we planned it at the Pier. We needed a safe place to do nothing, which ended up being more than enough.” Nick is right. Sometimes simple is better. For some of us, it had been over three months since we’ve seen our friends anywhere other than a on computer screen and that was the goal of this whole thing—to reunite and reconnect.

The event really brought home the idea of what it looks like to be a community. Nick summed it up perfectly when he said, “The opportunity to be with our friends in person was really great. I’ve been going to Hoboken Grace events for eleven years, and it was one of the most memorable.” This first in-person event since Covid-19 proved that the people make it special, not the activity.

Even though games were played, it seemed all people wanted to do was catch up and enjoy the sun together. Personally, I kept thinking of the saying “You don’t know what you have until it’s gone.” We’ve all heard a grandparent or Oscar winning movie say it, but it’s true. I love connection events, but I haven’t always made an effort to attend all of them. Usually if they involved food, I was there but often I’d find myself saying, “I’ll make it to the next one for sure!” Until suddenly, there wasn’t a next one; at least one that wasn’t virtual. People I thought I would see next Sunday were suddenly quarantined in another state with family members or sick themselves.

Looking around at everybody having a good time, the general feeling in the air was that this was much needed. John, an attendee, expressed his excitement saying, “As an extrovert the virtual side was helpful, but I definitely noticed something was missing. I realized how much I missed personal interaction. It energizes me and fills me up. Seeing my friends again in person made me feel a bit like my normal self again.”

It comforts me knowing these bonds are so strong that it doesn’t matter what we do or where we are in life. What matters is just being together and giving each other the little bit of energy we need to become whole. I don’t know what future connection events will look like; they could be completely different or return to some form of normal. Whatever the case, I know I won’t take the time I have with my Hoboken Grace family for granted ever again.

Don’t miss your chance to connect either; check out our Events page in the app or on the website to see what future in-person and online connection events we have coming up!