The holidays are meant to be a time for celebration, an opportunity to gather with those we love and look back on the experiences we’ve shared over the past year. Of course, gathering together with loved ones also tends to come with something else: Food, and lots of it.

This week, we’re celebrating the holidays by talking about one of the best parts – the food! We asked you to send us stories about the special dishes – and moments – that you’ve shared as a dinner group. Here’s a sampling. Bon appétit!

My favorite meal I’ve had at a Hoboken Grace dinner group was cooked with a spirit of adventure and optimism. It was Noelle and Courtney’s first time hosting dinner group at their apartment. They were fresh out of college, living in their post-graduation dive of an apartment. We awkwardly crammed into their living room, tentatively perched on folding lawn chairs. When we assembled, hungry in the kitchen, Noelle lifted a pan lid to reveal a mound of steaming hot mac n cheese. For the piece de resistance she pulled out of the oven a tray of dino-shaped chicken nuggets. What a feast! As Noelle and I got to know each other I would tease her about this first meal and frequently ask her to repeat it. My regular diet does not contain dino nuggets and mac n cheese, so the weeks Noelle hosted dinner group were always a treat for me. Many years have passed since then and Noelle has hosted dinner group dozens of times, and now she has the number for Dominos. 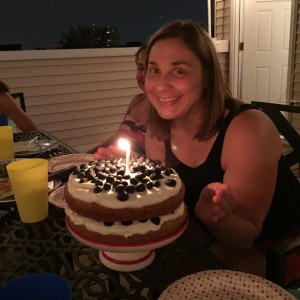 In our dinner group, although dinner is a central part – it’s the dessert that we’re truly passionate about. When I became a dinner group leader, I knew I wanted to do something special for the women in my group, and what better way to celebrate people than with cake?

The motivation behind this was, in part, trying to find a way to share my gift of baking with others, but also an attempt to celebrate each person individually. There was a series last year that talked about the value of celebration, and I knew I wanted that to be an integral part of our dinner group.

Most people who know me know I love baking. But the true reason why I love it so much is for the joy it brings people. So each time I make a birthday cake for someone, it’s carefully crafted in the hopes that they know how much they are truly loved and valued. And as we share each cake, it gives us an opportunity to intentionally celebrate that person. So while we may not break bread in the most traditional sense, it’s my favorite way we celebrate within community.

While I can’t take credit for even finding this recipe, it has become a quick favorite among the group. It is a non-traditional cake of sorts, but moist and delicious all the same.

You can see some of our dinner group’s cakes on Instagram, under #dinnergroupbirthdaycakes. 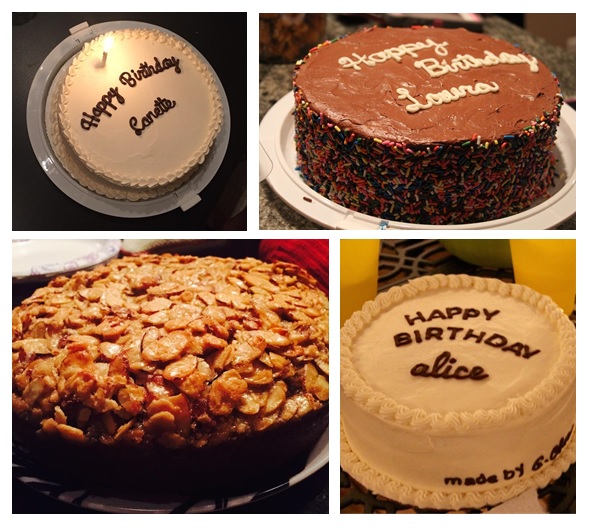 Our dinner group LOVES food, and we love to talk about food. Most of the time while we’re eating we’re suggesting other restaurants for breakfast, lunch and dinner! If someone in the group is traveling, the first suggestion is coffee shops, bakeries and restaurants. It’s definitely something that brings us together. Making new recipes together is just part of how we roll, but I think one of my favorite dinner groups was our last one when we had a potluck of everyone’s favorite Thanksgiving dishes (basically a DG Friendsgiving!). I think food (even outside of dinner group) is something that brings people together and makes them more comfortable around each other. It opens you up without realizing it because you’re all sitting at a table sharing something even if it’s your first time in dinner group. You’re not distracted by your phone or trying to yell over some bar’s music. We’re all just enjoying each other’s company and listening to each other. 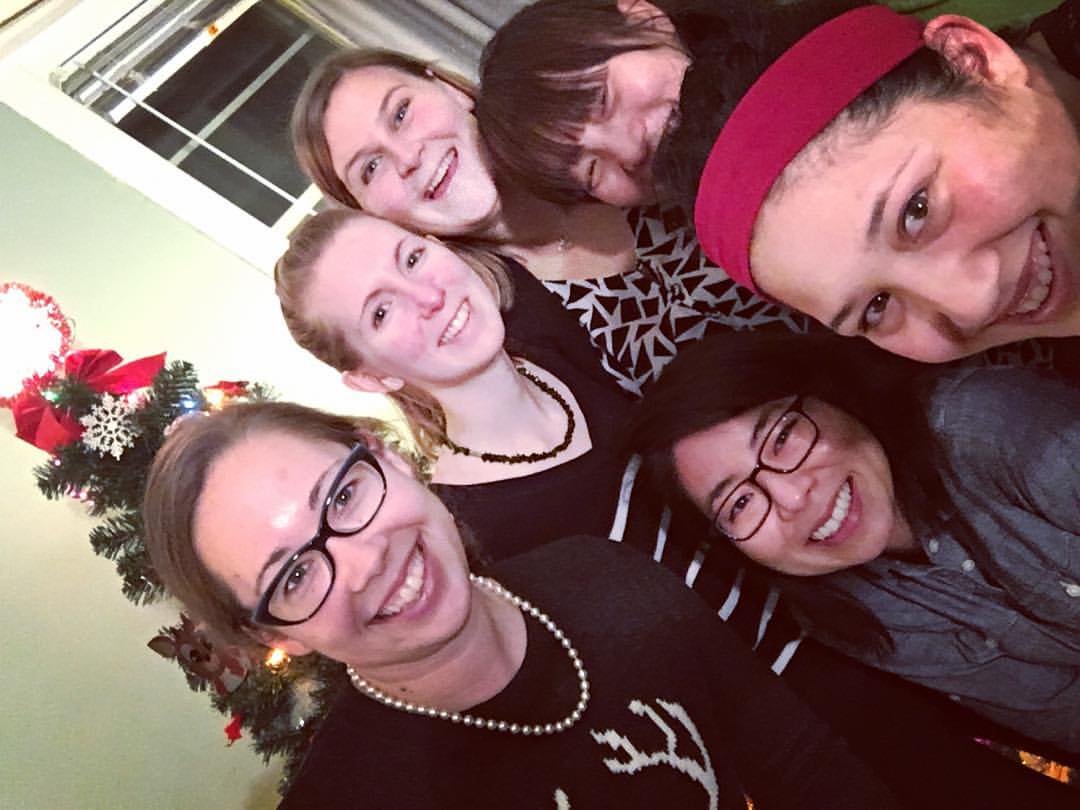 Our dinner group takes turns hosting, but attendance is usually highest when Sheena cooks. That’s because Sheena’s dinners are basically three-course meals, with a carefully crafted menu that takes into account the dietary restrictions and personal preferences of each person in our group.

And while her dinners always seem to come together effortlessly, these are not simple, thrown-together meals. For example, a menu from one night over the summer: pulled-pork sandwiches, a build-your-own baked potato bar, corn on the cob, coleslaw, peach cobbler with ice cream and peach sauce over ice cream (the gluten-free option).

But one of the best dinners at Sheena’s involved leftovers. The Sunday before Thanksgiving, Sheena hosted a huge Friendsgiving potluck, complete with a bacon-wrapped turkey and a dozen side dishes. I half-jokingly asked if we could come over that Tuesday for dinner group, so we could eat the leftovers. Sheena said she had a work party that night, but without hesitation handed over her spare key.

We gathered there that Tuesday, pulling nearly every container from her fridge. Once our plates were empty and our stomachs full, we went around in a circle in her living room, listing the many reasons we were thankful for one another. We didn’t get to tell her in person, but we were all thankful for Sheena and the way she invited us into her home that night. We were also thankful for her peach cobbler.

The first summer I lived in Hoboken, I was (admittedly) intimidated by the culinary skills of the rest of my dinner group. For a picnic night, I went out of my comfort zone and made this roasted corn and quinoa dish. It was less about how well the dish was received (and how easy it was to make) and more about the memory of sitting in Church Square Park on a summer night, enjoying the conversation. The recipe has evolved over five years, but I make it at least once a summer and treasure how much we’ve changed with it.

The dish I bring to dinner on Sundays isn’t unique – I found it on the internet, actually – but everyone seems to enjoy it when I bring it over, and I always get requests to make more. It’s a rice side dish thats boiled in chicken (or vegetable!) broth with peas and carrots mixed in. I originally decided to make it because I wanted a way to say thank you to everyone who cooked food for us every week. Now it’s become somewhat of a weekly staple, and it usually goes well with whatever we’re eating that night.

A side benefit of making it is that it’s easy to cook a huge bowl of rice in a short amount of time. I usually boil about three cups of rice, which if you aren’t aware is a whole lot of rice. This typically means I have plenty of leftovers at the end of the night. First, I share some with my three roommates, who are all guys and cook as little as I do. Whatever is left after that I store in the fridge and wind up eating for dinner for the rest of the week. In fact… I’m eating it right now as I write this. So in helping out my dinner group, I actually managed to help myself (and my roommates) eat better in the process.

To be notified when Dinner Group enrollment opens on Sunday, Dec. 27, register here.