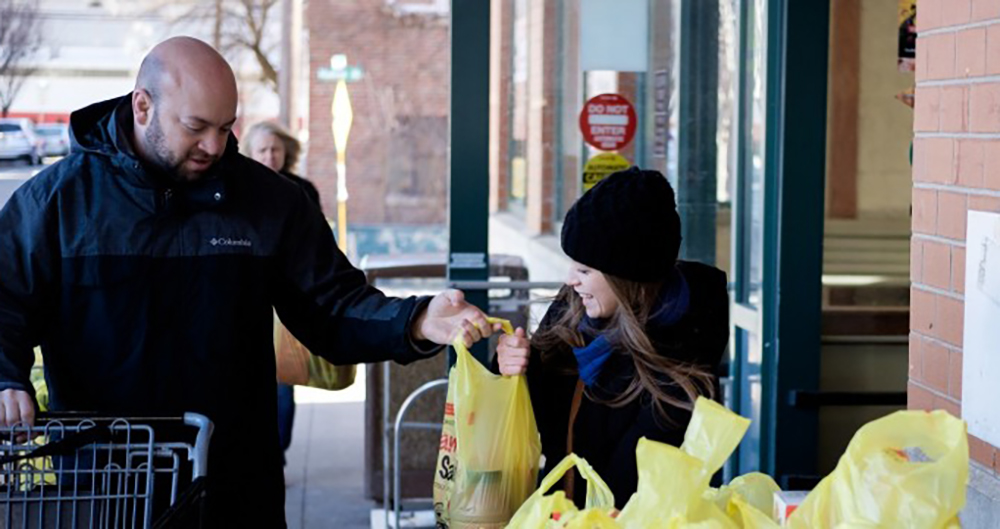 Once a month, a Hoboken Grace table is set up outside of ACME supermarket on 7th and Clinton streets, inviting shoppers to drop off purchases for the Hoboken Shelter as they head out to their cars. On the way in, shoppers are offered a postcard listing “Most Needed Items” – things you’d expect such as cereal, tuna fish and marinara sauce. There are also more unusual things, like postage stamps and socks.

Early into the collection process on a recent Saturday afternoon, some groceries were already bagged and concealed behind the tablecloth. Many donated products remained visible to attract the attention of shoppers, and give people an idea of what particular items we were collecting. Many smiles, “thank yous” and short greetings were exchanged, and some people gave money instead of food. One serious little girl walked up to the table with her family’s offering of a shampoo bottle, and handed it to a grateful volunteer. A rough tally was kept of what was donated, and at the end of the day, whatever items still lacking were purchased with the donated cash.

About a half-hour before leaving, we started packing up the rest of the donations and putting them in the hatch-back of an available car. Just then, there was a flurry of new supplies, and whenever the table was almost cleared, the flow of donations kept it full — giving the impression of a never-ending cornucopia of food.

At the shelter on 3rd and Bloomfield, some of the men benefiting from these donations were called out to the sidewalk to help carry them in. A woman in the back of the jam-packed vehicle handed out bags as quickly as possible. The men formed a sort of fire brigade to pass the bags along their line — across the sidewalk, through the door, and into the kitchen.

“People commonly think of the shelter as a soup kitchen, and a safe place for people to sleep overnight,” said Warren Hall, one of the organization’s staff members. “It is those things — and more. We serve 400 meals a day, and our guests take 1,000 showers a week. Some people with stable housing and jobs still come in for the free meals if their budget is tight that week –- we don’t turn anyone away.”

In addition, the shelter offers laundry facilities, and the staff can provide suits and ties for men going on job interviews. There are case managers available who can help people start the process of finding a job, finding an apartment, and connecting with Garden State Episcopal CDC in Jersey City for financial assistance, said Warren.

The shelter is officially called The Community of Faith Hoboken Shelter, because it is supported by local churches and the United Synagogue of Hoboken. The staff encourages the guests to be people of faith, to pray before meals — and rely on the Lord as well as on institutions that are set up to help them.

The Hoboken Grace building is located directly behind the shelter on 3rd street, and shelter guests are encouraged to go to the services and programs. Some get to 301 Garden early on Sunday morning to help set up the folding chairs that form the sanctuary seating. And Millie, the receptionist at the shelter, was just baptized at Hoboken Grace on Easter.

Likewise, the Hoboken Grace community has been serving the shelter for several years – and there are several ways you can help. Even though there are 20 staff-members employed there, the shelter could not run without the help of volunteers. The most popular way to lend a hand is to serve meals. A group from Hoboken Grace meets on the first Friday evening of each month to do just that. You can also participate at the food collection tables, which are set up one Saturday a month at ACME (7th and Clinton Street, 10:00am – 1:30pm) – email outreach@hobokengrace.com.

There is also an ongoing Amazon.com Wish List for the shelter. People can choose what they want to donate from the wish list, pay Amazon, and it gets delivered straight to the shelter. Quick, easy, and available from anywhere.