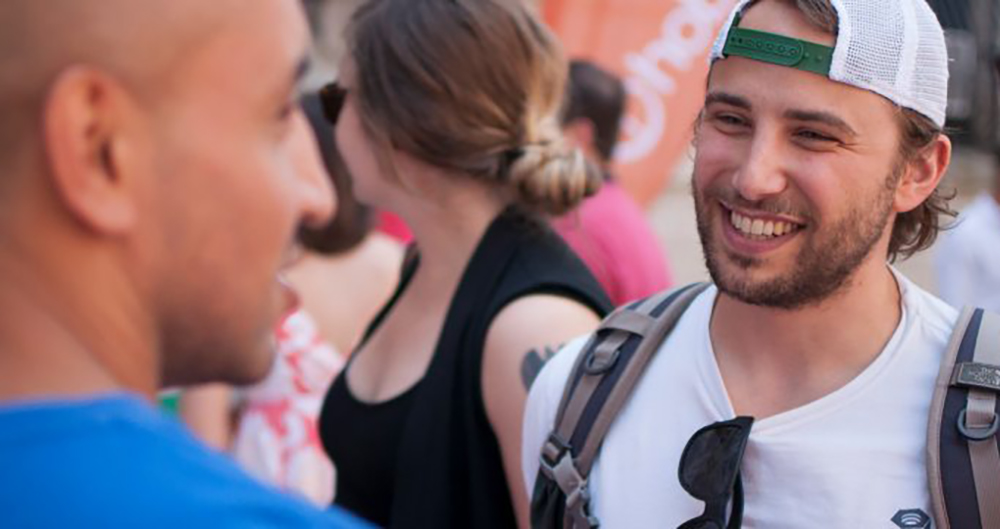 My first time ever walking into Hoboken Grace was Memorial Day weekend, 2019.  I’d occasionally see people walking up and down Washington Street with a Hoboken Grace t-shirt, or see a booth or flags flying at one of Hoboken’s street fairs or at a waterfront park.  I enthusiastically swung open the door and stepped inside. To my surprise, the church was closed…on a Sunday?

As my journey of spirituality and faith waxed and waned in intensity over the years, I’d never lost touch with the personal connection I felt with God.  I’d often find myself in conversation with Him, even if I was going through one of my “down periods” in attending church.  By Memorial Day weekend, 2019, I had been actively seeking a new community of faith.  Leading up to that weekend, my out-of-state girlfriend, who attended a Northpoint Partner church herself, suggested we try Hoboken Grace.

As a resident of uptown Hoboken, I rarely, if ever, had occasion to walk by 301 Garden Street.  So, on that relatively warm Memorial Day Sunday, we zig zagged our way down from the northern edge of Hoboken, eschewing the Lime scooters in favor of a brisk, but slightly perspiration-evoking walk.  Finally reaching the church, we carefully stepped a few feet inside the lobby, fully expecting to be met by an assortment of greeters, ushers, and members hustling around pre-service.  Instead, it was silent.

I barely had time to wonder to myself if we were in the right place when, seemingly out of nowhere, a jovial, goatee-adorned fellow appeared in front of me.  Pastor Anthony, as if expecting our arrival, introduced himself and immediately offered some words of appreciation for our effort, while explaining to us that we had arrived on the one Sunday each year when there are no services in order to celebrate those who serve as church leaders.  He invited us to stop by the Memorial Day picnic the next day.  We shook hands (remember when we used to do that?) and I told him I’d see him at the picnic.

The next day was a slightly windy but beautiful Memorial Day.  After bidding farewell to my girlfriend as she headed back down south (yes, I dropped her at the airport; didn’t make her take an Uber), I ventured down to Maxwell Place Park and easily spotted the sea of orange.  Looking around for Anthony, I found him mingling somewhere between the cornhole and corn on the cob.  He at once put me at ease amongst a throng of strangers, introduced me to some of the Hoboken Grace community, and we struck up a more in-depth conversation than time had permitted the previous day.

Growing up, I regularly attended a church. I have always been grateful for the foundation my relationship with God provided.  However, even as a child, I remember questioning some of the articles of faith (both manmade and within Scripture).  This discomfort deposited deep within me as if stuck in the firmest bedrock and had always made it difficult for me to “mine” my experiences and share my personal relationship with God with others.

So, one Sunday at Hoboken Grace, I was listening to Pastor Chris speak about how to have conversations about one’s personal faith with people outside the church.  It touched a vein.  As the weeks wore on and I continued to listen to Chris share the numerous blessings reverberating throughout our community when it came to sharing faith experiences. So, I put my fears, apprehensions and self-doubt aside and decided to take the chance.

My closest friends are fellow Hoboken residents and are a non-practicing couple from a mixed religious background.  They have two small children under the age of six.  We’re blessed with a closeness that allows us to share the good times and the bad, be there for milestones in our lives, and spend time together fairly regularly.  On a particularly unremarkable Saturday evening last Fall while at their house for dinner, we started discussing our plans for the next day.  I mentioned that I’d be going to Hoboken Grace which was my new “usual.”  Inspired by Pastor Chris’ encouragement, I decided not to stop there.  I shared with them my personal experience at the church so far and how I thought they’d really enjoy the people, faith, and family atmosphere at Hoboken Grace. The wife announced that she’d be open to her husband and the kids “checking it out” and that it might be good for them.  But, to my disappointment but not necessarily my surprise, she made it clear that as a non-Christian, she herself had no interest in attending.

Months passed and the opportunity to attend services together, or for them to go on their own, had not materialized.  We all seemed to be out of town on alternating weekends quite often.  Whenever we did get together, most often during the week, I continued to mention Hoboken Grace.  I trusted God that when the time was right, the husband and kids would join me one Sunday.

Fast forward to Monday morning, March 23rd, 2020.  Most of us were working remotely in a post-coronavirus world, routines had been turned upside down.  Accessing the news had become a “proceed at your own risk” activity.  In the middle of writing a work email, my attention was diverted by the vibration and gentle ping of a new text message.  Seeing my friend’s name in the notification window was a welcomed distraction since I hadn’t seen them in a few weeks as isolation and self-quarantine have become de rigueur.

Opening the text, I was immediately confused.  The first thing that caught my eye was the unmistakable logo of Hoboken Grace.  “That’s strange,” I thought to myself.  The message said, “Your Hoboken Grace event is live. Join it now at live.hobokengrace.com.”  My initial confusion turned to speculation. “They must have come across this from a friend,” I thought.  They obviously wanted to make sure that I was aware of the daily “Anthony & Chris in the Morning” video series and I was thankful that my friends would look out for me in this way.

So, I asked, “Where did you get that?” Then, my friend, a non-Christian mother of two, responded:

“I signed up for it. Need some meditation/prayer.”

The power of the moment took my breath away.  In nine little words, on the screen of my iPhone, I experienced the awesomeness of God living inside each one of us and being drawn out into the light.  To bear witness to God opening the heart of someone I care about was an immeasurable blessing.

I am so grateful I didn’t say no for them. In finding my own way back to God I had learned the power of His transforming love and what sharing that love can do for others. Still, it took me stepping out of my comfort zone and sharing Him with the people I love and trusting He would do the rest.

Being part of the Hoboken Grace community helped me to find the strength and confidence to be a vessel for God’s grace and abundant love.

This is an unmistakable and clear reminder that I am, in fact, Home.