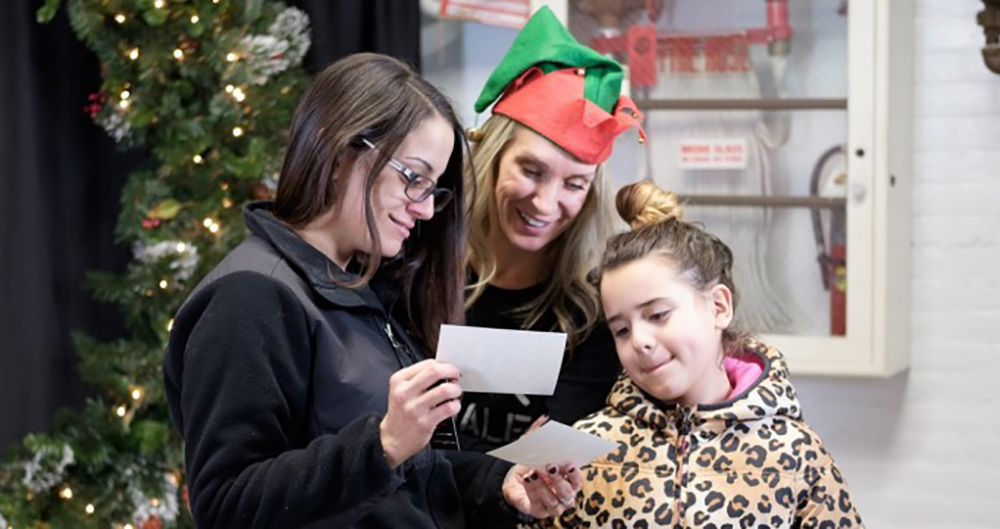 The Hoboken Christmas Exchange started with a simple desire to give.

Kara had been looking to donate some baby items, but she was unsure how to get them into the hands of a family in need. Her search led her to not one, but several families that fit the description. They needed other basic items as well: sheets, kitchenware, pajamas, shoes.

“I thought, if I have the desire to give, I bet other people do, too, and I bet there’s some way I can help match those people,” she said.

That Christmas Eve, Kara loaded a U-Haul with her husband and in-laws and distributed the gifts to about two dozen families. She remembers their smiles, their tears and their disbelief that a stranger would buy them something.

One woman, Kara remembers, needed a pair of dress boots for job interviews. The woman had been shy about asking for the shoes and didn’t expect anyone to buy them. When Kara delivered the gift, bought by one of her co-workers, the woman was brought to tears.

“When she saw that she got them, she cried, and she hugged me,” Kara said. “She said, ‘This person doesn’t even know me.’ ”

Another woman, a mother of four kids, asked for a microwave. “To some people, it may seem kind of extravagant, but if you’re a mom, you need to heat up food sometimes,” Kara said. “So we made sure she got her microwave.”

That was four years ago, and the Christmas Exchange has grown every year since. The event is organized by Hoboken Grace (with Kara’s help) and last year, the event involved more than 1,300 people, including nearly 800 children and family members who received gifts. That was thanks to more than 350 people who adopted individuals or families, and over 100 volunteers who worked in various roles throughout the day.

This year’s event, on Saturday, Dec. 9, is on track to be just as big. And the growth of the event has multiplied the ways to get involved. You can sign up to “adopt” an individual or a family, or you can help as an “elf” and volunteer at the event itself.

In many cases, the gifts on families’ wish lists include ordinary items such as clothes, household items – even diapers. But there are also requests for toys, helping ensure that no child in our city goes without a gift.

“These are people that are part of the same community I live in,” said Kara. “To give tangibly to someone who you know is your neighbor and whom you know is in need is incredibly meaningful. … It is a beautiful and tangible way to love.”

For more information on the Hoboken Christmas Exchange and how to adopt an individual or family, visit HobokenChristmas.com.