Hoboken Grace is online only! Click here to see all Online Opportunities.

But those who attended the Hoboken Christmas Exchange on Saturday say what made the event most special were the moments that made their heart swell — the moments filled with smiles and tears, gratitude and generosity.

“My favorite part of the event was seeing the smiles on the families’ faces as they received their gifts,” said Lisa, who adopted a family and also volunteered.

More than 1,300 people participated in the event, which aims to ensure that no child in our city goes without a gift. That number includes nearly 800 children and family members who received packages; more than 350 people who adopted children or families; and over 100 volunteers who worked in various roles throughout the day.

With the event now in its third year, Hoboken Grace worked with the Hoboken Housing Authority, HOPES, the North Hudson Community Action Corporation and The Jubilee Center to coordinate wish lists for families. Gifts included basic necessities such as household items and toiletries, children’s clothes and toys, strollers — even a sewing machine for a teenager interested in fashion.

“As Christians, we are called to be Jesus’ hands and feet, to literally do the things that Jesus would,” said Deji, who took family portraits as a volunteer. “The event made it possible to do just that … to love the community and bring a little bit of light and joy to everyone.”

The entire experience was very humbling, said Sonja, who helped organize the event. She recalled one woman who fosters children — 10 currently, and more than 100 over the past few years. She wanted nothing for herself, just something for the kids. Adopters stepped in and purchased a gift for her as well. 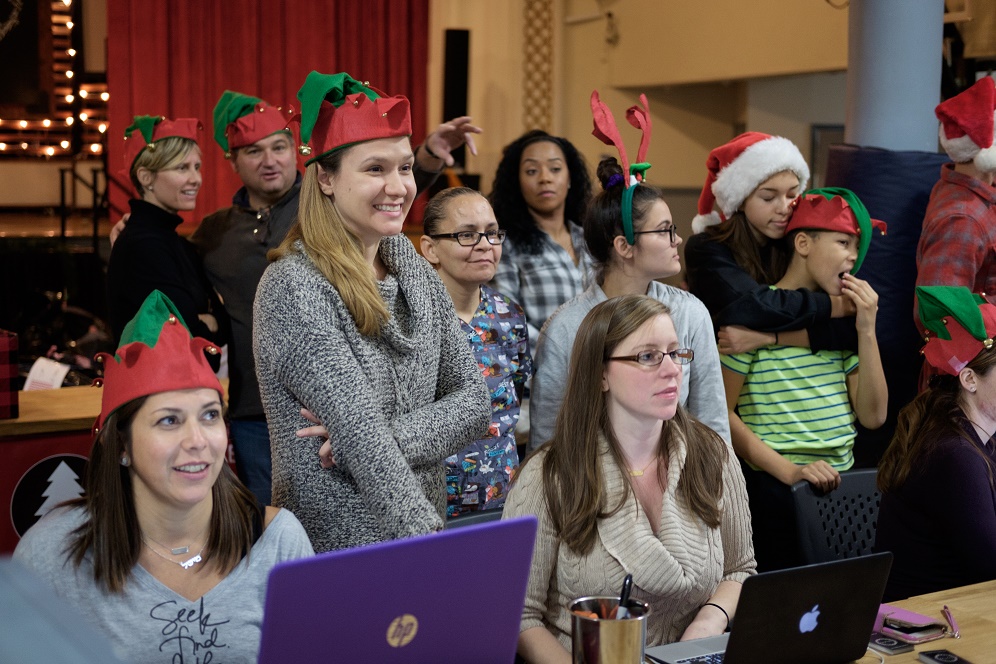 Another woman had adopted a family last year, Sonja said, and asked if she could participate again. She had been buying and storing items all year, and because of that was able to provide gifts for about 35 adults and children.

Irene, who volunteered all day Friday and Saturday, said her favorite part was seeing how much joy the experience brought to both those who adopted families and those who received gifts. It was a feeling she had experienced as well.

“Buying gifts for the young boy I was assigned to made me feel good knowing that some of his mom’s worries were put at ease,” she said.

In a few instances when the timing was just right, some volunteers were able to hand packages to the family they adopted. There were smiles and excitement (as well as tears) from both sides.

“I had the chance to share with one parent that I had the pleasure to purchase gifts for her infant, including a box of diapers,” said Heather. “While it seemed like this gift wasn’t as “fun” to purchase, receiving that gift meant the world to this mother.”

Those who received gifts also had the opportunity to take home a family portrait.

“Having your picture taken can sometimes be a very affirming experience,” Deji said. “For just a moment one becomes the complete center of attention. The kids particularly reveled in it, sometimes shifting from serious to cool and then goofy poses in the space of a few seconds.”

Erika said she loved having the opportunity to capture these moments for the families.

“We had people laughing and goofing off, clearly enjoying themselves or even getting emotional,” she said.

The team printed 300 photos in all, but one moment stood out in particular.

“There was a mother with a stroller with two adorable, very little kids,” said Deji. “We were talking and she told me she had no pictures of herself with her kids, and how grateful she was.”

The photo booth was one of many areas where volunteers helped the event run smoothly. Other “elves” wrapped presents, greeted guests, supplied cookies and coffee, and helped with gift distribution.

Reuben started the night as a runner, retrieving gifts and bringing them to families, but ended up also carrying gifts to families’ cars.

“This was an amazing experience. I was able to work with some awesome people and made friends along the way,” he said. “My favorite part of the night was every time I handed a gift bag to a family, I was able to see them light up with a smile from ear to ear.”

While the event was a huge success, it couldn’t have happened without the help of volunteers and those who adopted children and families, said Anthony. The additional “elves” capable of working on multiple computers allowed things to keep moving as gifts were being dropped off and picked up throughout the day.

Each year the event seems to get better, Anthony said. He’s already looking forward to finding ways to impact even more families next year.