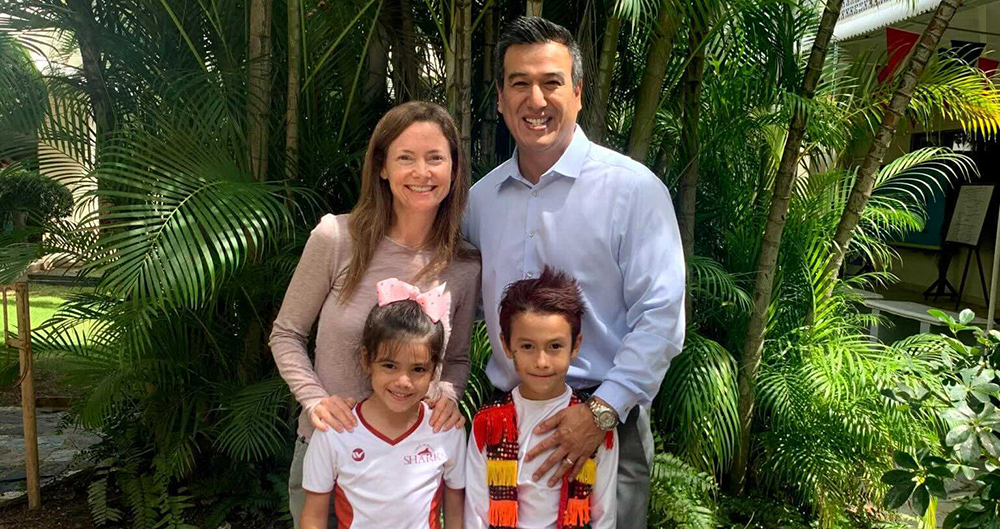 Kim and her family thought they had found a home in Hoboken, they had purchased a condo, their kids were settled into school, and the whole family was plugged in at Hoboken Grace. Everything was going according to plan, when suddenly life took an unexpected turn, and Kim’s husband’s job found them all uprooting and moving to the Dominican Republic five years ago.

In addition to the language barrier and cultural differences, they had a hard time finding a local church, and nothing existed that was similar to Hoboken Grace. Most of the churches were traditional Catholic and Spanish-speaking. They managed to find a small English-speaking church but the traditional Catholic services and lack of connection groups, children’s programs, or community events were a far cry from what they had come to love about Hoboken Grace.

Kim wondered if this new place would ever feel like home and she longed to feel connected again. They made the most out of it and even helped create a Grace Kids–like class for the children at their new church, but it wasn’t quite the same. Then, the pandemic hit and they struggled further to make connections and navigate their new community. The shutdown completely limited their options for spiritual engagement and their local church stopped holding services.

Although the pandemic seemed like it would make some local connections harder, it did provide unexpected ways for Kim and her family to reconnect with the church family they had left behind. Hoboken Grace’s virtual services, dinner groups, and Grace Kids programs, suddenly gave them opportunities to find their home in Him, no matter where they were.

The Story Team recently spoke to Kim about her experience and the impact these virtual connections have had on her and her family.

Story Team: You turned to Hoboken Grace once your local church stopped holding services. What did you find?

Kim: We had kept up with Hoboken Grace after we moved and we would often listen to the services online, but when the shutdown happened and Hoboken Grace expanded their virtual options, we were excited to be able to engage more. Ever since March, the kids and my husband and I have been listening to the messages every Sunday.

Then in the fall I joined a 10-week virtual women’s dinner group and in January, my husband and I joined Re/Engage virtually which has been great. I have also had an opportunity to serve virtually by joining the Analytics Team at Hoboken Grace.

We’ve got a nice system now where we can attend church virtually as a family. The kids participate in Grace Kids, then we all watch church live together and it feels like we’re fully engaged and attending church again together.

Story Team: Why was it important to you to join a virtual dinner group?

Kim: As Pastor Chris says, if you just hear the message on Sunday but you’re not putting it into practice and changing things, there’s not much point. When I lived in Hoboken and attended dinner groups before, they were always such a great place to talk through things and put the messages into practice. So, I was looking forward to being able to do that again and was happy to also join Re/Engage to get my husband more plugged in as well.

Story Team: What was your experience like having been in an-person dinner group before and now joining an all-virtual one? Did you feel like you were able to make good connections and build relationships?

Story Team: How have you been able to develop community through your various virtual group experiences this year?

Kim: I felt like I immediately got a support network. When you have people praying for you, you immediately feel like there’s people out there who care about you and who you can talk openly to. It seems like in today’s world it’s hard to talk about your beliefs and spirituality so it’s amazing to have people who share that and a space where you can openly discuss what you’re feeling and thinking spiritually. And not only people who are listening to you, but also holding you accountable and helping you apply it your life. So, it’s great to have that outlet and people in your life who are praying for you, supporting you, and encouraging you.

It seemed like it would be difficult to make a connection virtually but being involved in the groups, serving virtually, and watching live services, I feel like I’m making more and more connections.

Story Team: How important has it been for you guys to have these connections now that you are away?

Kim: Now that there’s an opportunity to do so much more online, I feel like we’re part of the church again. Being able to interact with the community again has been so nice. Hoboken Grace has evolved so much since we lived in Hoboken five years ago and it’s been great to reconnect and see the growth.

Story Team: How have your personal rhythms and relationship with God grown through these connections?

Kim: Being able to be in a group and also find a way to serve has brought me deeper and pushed me to take different steps on my own spiritual journey. It started with just deciding to watch live and attend virtual service regularly. Then I was like, I should join a dinner group. That led me to serve as well. Those steps helped me grow spiritually and helped my personal rhythms. It helps you stay connected with God and your daily rhythms expand as you get more involved.

Story Team: When your local church opens up again, do you plan to stay connected to Hoboken Grace?

Kim: It will be interesting to see how things evolve. We may be moving soon, either to another country or maybe back to Hoboken, and if we do that, I’ll definitely be reconnecting to Hoboken Grace. But in the meantime, I will probably do both. We have been able to bring some of Hoboken Grace to our local church by helping to establish a kid’s program and I have fostered a lot of relationships here that are important. But I think in some way I think we’ll always stay connected to Hoboken Grace. Having so many options to connect virtually right now really makes me feel like I’m part of the community. It’s been great to see people attending virtually from all over the country and world. I’ve seen people online from the Philippians, all over the US, and everywhere. So, it’s great to see the technology evolve and everything that Hoboken Grace has done to be able to support that happening.

Story Team: Why would you encourage others to join a dinner group right now?

Kim: I think for anyone who is looking for a sense of community and to connect with other people in general, but to also connect spiritually and be able to talk about God, groups are such a unique forum to do both. I would tell people it’s so easy and welcoming. You will feel like you’re connecting from the very first meeting. I know it can be hard to make the decision or you debate it for a while, but when you finally do it you will feel instantly connected and welcomed and glad you made the choice to do it. I’m so happy to be able to stay connected even though I’m abroad and I hope others will find that connection too.