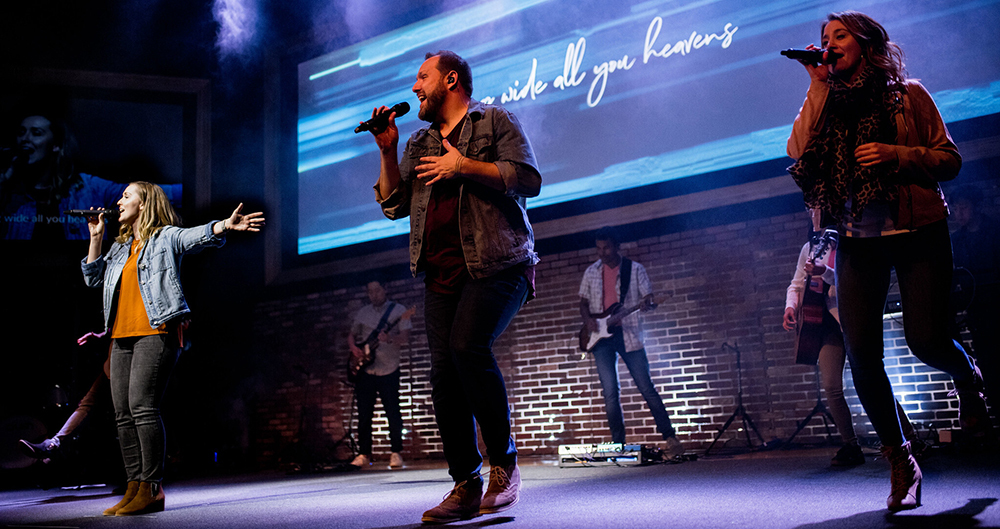 We recently wrapped up the “God is For Us” series here at Hoboken Grace. The end of a series is always a great time to reflect on the full conversation as it encourages us to think more deeply, or differently about what God was teaching us.

This week we sat down with longtime Hoboken Grace member John to discuss how this latest series impacted him and changed his perspective on past challenges he has faced. John’s powerful message is one that all of us can learn from and think back on as we strive to remember that God is for each and every one of us.

John, we’ve been going over this profound idea that “God Is For Us.” What learnings from the series have you been able to take with you on days beyond Sunday in an effort to bring that message into your everyday life?

This series has been really interesting because each conversation has really applied to different moments of my life and how God has worked through them. It’s made me reflect on my past and think about how God was there at some pivotal moments.

Growing up I was bullied a lot. Made fun of, picked on, and it really dictated who I was. There were a lot of moments in that time where I doubted that God was for me, and even doubted that He would even want to be for me, because I didn’t like myself.

That really shows the difference between hearing “God Is For Us” and thinking of it as a nice, comforting thought, but then living your life, going to school and sometimes you don’t really see it or feel it.

Exactly. And the aspect of doubt was how could He be for me when so many people seemed against me? They made me feel like I was not normal, and I would then seek acceptance elsewhere.

Because if I didn’t like myself, then how could God like me? I dealt with this question for a long time. When I was younger it was the bullying and my escape was running to my bedroom after school and using my imagination to get away from the pain. As I got older my outlets changed. Partying was a great distraction and everyone else seemed to be doing it. I was also pursuing dangerous relationships. These things became my identity and helped to numb the feeling that I still didn’t like myself.

So, it’s interesting…as I’ve listened to this message about how God has always got our backs and goes before us, I look back at these parts in my life where I was running away from myself and God because of the circumstances. I see now that He was there, He was pursuing me! There were things that happened where I know that it was God looking out for me. So even in the moments where I was not living life for Him, because I just didn’t see the point, He never abandoned me, and He had not forsaken me.

In those darker moments, did it feel like a giving up on God type of thing?

Yeah. I mean I didn’t necessarily give up on God. I had accepted Him into my life when I was 16. But it’s funny…in those moments where I was still really struggling, I figured I still needed to do things that others were doing to be accepted, but there’s a lot of emptiness in that. I thought each time I did those things, that God would abandon me, but He never did. Instead He just kept coming for me, which then lead to me to realize that He has a plan for me.

It was a very frustrating time because even knowing this, I still ran and made choices where I was still seeking acceptance in worldly things instead of God.

That’s interesting. We hear a lot about the “wrath of God” and about punishment in the Bible. We become fearful of that. That if we were to ever go against God then why would He stick with us?

I do believe that we can’t escape the consequences of our mistakes, but God is always there as well. And when I think about God planning the way, there were choices I made in my life like the pursuit of unhealthy relationships that interfered with His plan and that I knew God would not want for me.

But every time I pursued a lifestyle and relationships that I knew in my heart God would not approve of, something would happen and a door I was trying to walk through would close. I couldn’t understand why I couldn’t do what I wanted, but eventually I came to the conclusion that God was not wanting me to do that thing, whatever it was. He was trying to keep me safe.

Do you often feel that God is still opening and closing doors in your life right now? What would you say to somebody that maybe doesn’t know if what they are experiencing is a sign from God or just a coincidence?

During ‘God Is For Us’ we talked a lot about doubt. This aspect of having something tangible to see and believing that if God is for me…then show me something. Prove it.

I chose to change careers about 8 years back. This was because I started feeling restless and wasn’t sure what to do with my life. I was comfortable with my job and enjoyed a lot of it, but all of a sudden there was something missing.

I started having conversations with God and began to deepen my relationship with Him. Over time, I began to realize that there were certain things I had to remove in order to become closer to Him, so, I started doing that.

As that was happening, in one of my conversations with God about what was next for me…this idea of becoming a counselor came into my mind. It made sense because one of the things I love to do the most is to be there for people. That’s because I didn’t have that in my own life with all of the bullying and all the stuff that just made me feel less than.

But, I initially pushed away the thought of being a counselor because I was unsure of whether it was me or God who was making the plan.

It just so happened that soon after I was sitting down with Pastor Chris and I was telling him where I was at mentally. His response to me was “have you ever thought about becoming a counselor?” In the moment, I actually didn’t recall the conversation I had with God, but I told Chris I thought it would be cool and so he said, “when are you going to start?”

I began to panic about what appeared to be a drastic change and said “with going back to school and licensing, I thought it would have to be at least a year!”

Couldn’t just pack up your things and be a counselor tomorrow, right?

Right. But as soon as I stepped out of that meeting and was waiting on the bus to get to work, I remembered the conversation with God and felt “this is what I’m meant to do!”

I stepped on the bus and began to cry because I believed I was going to have to leave my community which had become my family and head somewhere far away from them in order to go back to school.

But I was later comforted knowing that God uses people to speak His message a lot of the time. As a counselor, I could play a very tangible part in reaching others with His message.

I felt ready to do that because I had been having regular conversations with God myself. It always helps to develop that voice within yourself first in order to develop a relationship with Him and better understand His plan for you.

For me, that ultimate plan was that He wants to send me out to love others. Which is also His plan for everyone!

It’s like the concept of paying it forward. You want to be there for people.

That’s right. When I talk to people I ask them to listen and constantly be in conversation with God in order to receive wise counsel. But on top of that, I tell them that they have to start stepping forward and be proactive in their relationship with God. We spoke earlier of this idea of seeing signs of God. We often have to step forward in our faith in order to experience those signs.

As I started to walk towards God, He started opening doors. I sat down with the church, told them about my counseling dream and they promised to walk alongside of me and support me through the process. God was walking with me and ahead of me. But if I didn’t take steps forward myself in faith, I wouldn’t have been able to see those doors open.

That’s the powerful thing for me and how I know He’s always been there. That doesn’t mean I don’t still struggle or have doubts, but as I look back at my past and see how God was there during all of these trials, I know that God is for me. He is for each of us!