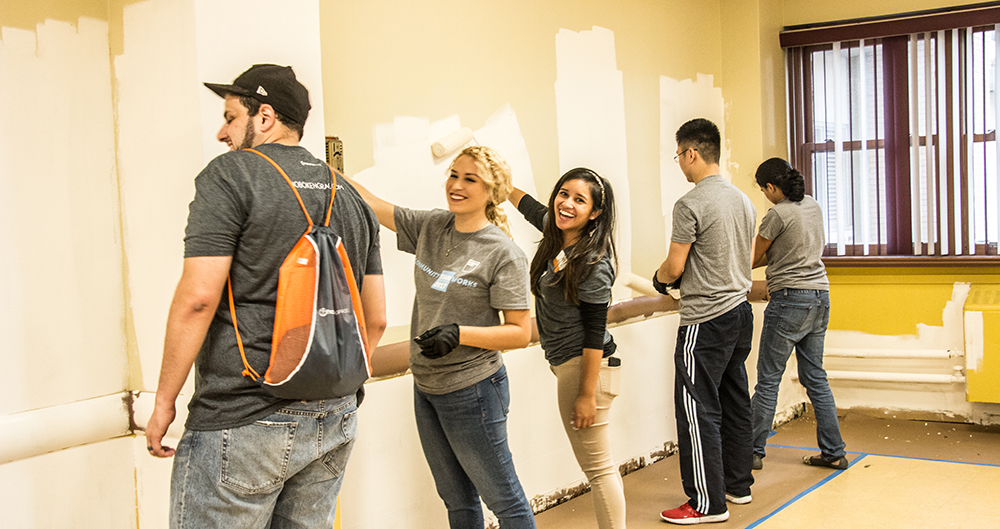 The words “Mind, Body, Spirit” are vividly displayed at the end of the Hoboken YMCA pool.  The lettering first made an impression on me years ago when I swam laps there once a week. One moment I’d be surrounded by the blurry water below, then my head would break the water’s surface in a traditional butterfly stroke.  As I inhaled, I would look for the clear large words beautifully tiled into the far end wall of the pool area, and swim toward them.  “Mind, Body, Spirit” – the YMCA motto.

A paint project at the YMCA was one of the 36 service opportunities at 1Day last month. No one has seen the tiled motto recently because gym section has been closed since 2010, but I was curious about the rest of the building.  The Young Men’s Christian Association is known for creating affordable housing for men on limited budgets, or who qualify for certain kinds of assistance.  With real estate prices out of control in Hoboken, it seemed a noble endeavor to hold a clean, safe space for those in need.

After 10 of us walked to the building from Hoboken Grace, Warren Hall, the YMCA’s live-in director gave us a quick orientation to the building’s history. He told me that even though there were plans to re-open the recreational part of the building, the Board of Directors felt that the housing units were the top priority. Originally there were 30 small private rooms (with no cooking facilities beyond a microwave and small fridge). Several conference rooms were renovated into similar residences, and a fifth floor was added to make the total occupancy 96 rooms. These small private rooms are known as the MBS (Mind, Body, Spirit) Housing, and there is a waiting list to get in.

The Hoboken building is the most desirable of the YMCA’s in the area (because of the views, parks, and access to public transportation). Warren explained that residents can get three free meals a day in the area if they go to the right locations at the right time. They were given details about this and many other services, as well as a Hoboken Library card. The longest current resident had been calling the Y home for over 30 years. 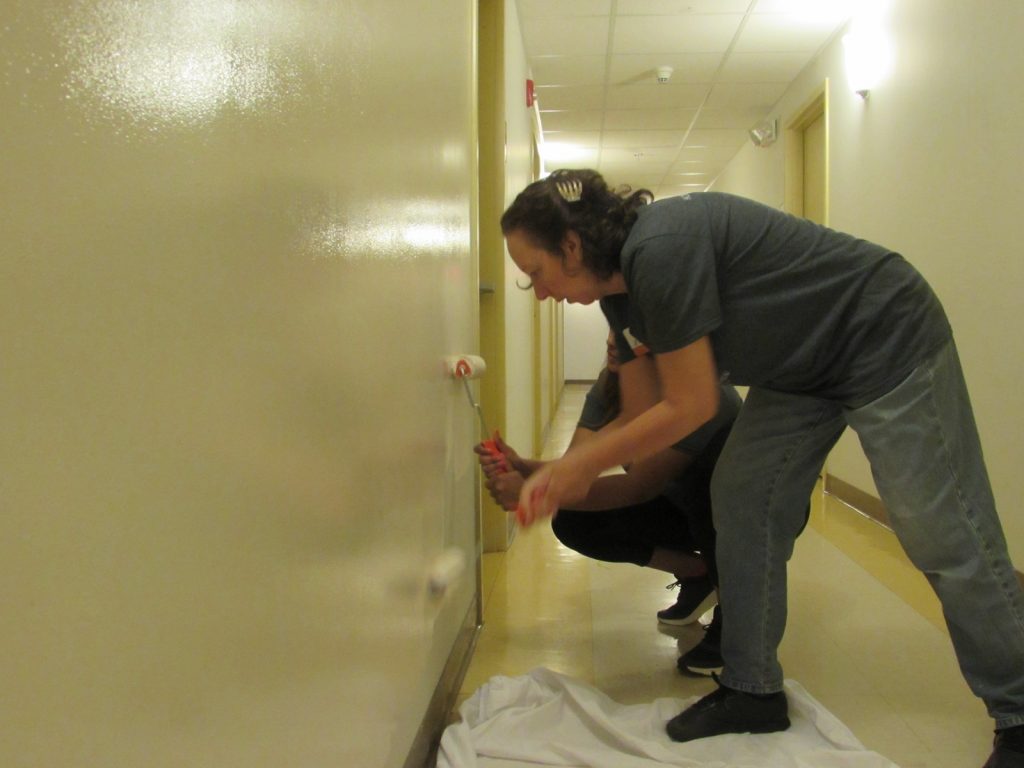 We were ushered upstairs to the fifth floor, where hallways (with east- and west-facing windows, providing circulating air) were waiting to be painted. I looked down one hall, then another one, spotted one small area of spackle — and wondered if we were on the wrong floor.  These hallways didn’t seem to be a top priority — they looked fine.  And it looked like we were painting with the same color.  I asked, “Do you just want us to touch up the scuffed and spackled spots?”

Warren said, “No, we want the entire two hallways painted.  It’s important that the men feel cared for, and brightening the halls with a coat of paint is an easy way to show them we want the best for them.  In addition, it’s good for them to see people coming in to help them by doing the work as community service.”

Another woman and I began painting the area between two doors, using an old fitted sheet for a drop cloth.  Curious about the size and arrangement of the dwellings, I kept trying to peek in when a door opened, but never saw more than a chair or small bookshelf.  There was the sound of a television behind one closed door, but the volume wasn’t turn up very loud.  A man in a wheelchair backed his chair out of his doorway and we made way for him.  Later, a man with glasses and a vest came out of his room and carefully walked between the painters working on either side of the hallway.

My painting partner and I worked our way down one side of the hall, and a taller woman followed us, finishing off the top part of the walls to the ceiling.  Several other men painted the other side of the hall, and soon, one had his iPhone out playing music for the workers.  Some chatted, some worked in silence.  When we got to the end of our hallway, a gentleman came out of his room to offer us cold flavored seltzer in plastic cups.

Later, I asked Warren what life paths had led the men to these rooms at the YMCA.  He said some were widowers, some retired, some had been unemployed for a long time and used up their savings.  Some were recovering from physical or mental health issues, some had been homeless and this was the first private safe space they had enjoyed in a long time.

One of the men’s dinner groups at Hoboken Grace had visited recently and asked what they needed help with.  The answers ranged from how to eat a healthy diet, to budgeting their income — a challenge no matter how much money you are working with.  Programs were put together to give them the information they asked for, and outside organizations work to provide other support.  And sometimes, a group of Hoboken Grace members find a free Saturday to come by and paint their hallways.

Warren is always looking for ways to improve the men’s life.  If you know of any nearby programs or activities that they might enjoy, contact Anthony at anthony@hobokengrace.com.